I spent an hour today taking stock of my art production in 2005 and 2006. In 2005, I took approximately 200 pictures with the Nikon, and another 2600 in 2006, most of which only now exist as photo-editing software statistics. I made a short list of 9 satisfactory pictures from 2005 and 25 satisfactory ones from 2006, threw out half of those, and then threw out half again to arrive at two short lists of photographs I'm not totally embarrassed by:

A weird mix of black and white and color photographs, sequences and autonomous images. Punching the titles into the searchbox at the top of the page should return the culprits in question. I might exhibit other pictures, but these are the ones that I hope survive.
- posted by cjb @ 5:58 PM
Friday, December 29, 2006

MISERABLE OLD PENSIONER [apropos of nothing]: Whatever happened to cocktail jazz? Music...it's all just screaming nowadays...

STAFF MEMBER: That's not screaming, sir, that's classic Chicago soul. Recorded in the early 60s. Nothing "nowadays" about that!

TC exceeded its 2005 cumulative elevation gain total somewhere around sunset, toiling up the side of the Cut past incredulous Japanese snowboarders. The usual routine: Seabus to Skyride, via Lonsdale Avenue, Prospect Road, the Baden-Powell Trail, BCMC Trail, and Larsen Trail to the base of the Cut, then straight up the edge of the groomed run, the last half-hour or so in the dark, snow hard like styrofoam, crunching nicely underfoot, snowshoes and poles doing their job, Rose T. Cat hollering encouragement from the top pocket of my pack. Red alpenglow through the trees, moon and stars visible overhead, the city's orange lights shimmering below.

It was raining near dawn, but the sky has cleared, and the clouds pulled back, to reveal the North Shore mountains, white with snow. 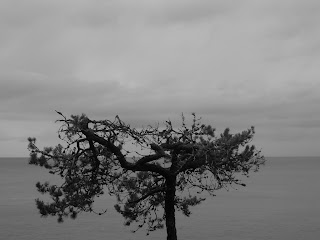 A view from West Vancouver's Lighthouse Park, grey curtains of rain moving slowly across Georgia Straight. Silver-soft ocean, a texture I always associate with Sugimoto's sea-studies. The park trails a mix of mud and blowdown, fallen timber stacked like cordwood in the underbrush. The Guy Edwards Memorial Tree gone, just a thirty-foot high snag, the rest of the trunk and branches scattered below. Pitch leaking everywhere, the smell sharp in the wet air. Goretex jackets and dogs bobbing among the trees, the light too low to make anything except out-of-focus studies. Back along Marine Drive, rain falling steadily now, past wreathes and Christmas lights marking the ends of long West Vancouver driveways, past twigs and debris piled in the gutters; dumpsters; construction rent-a-fences; old gardens; the scent of winter earth.

Last Christmas in the old house, its ticking fireplace and thick red living room carpet. Freddy the cat, the neighbors' pet and honorary Brayshaw family member, prowls up and down stairs, eddies round like smoke with his wide green eyes and huge grey tail. My father, seated in the living room rocker, slowly describes his father's life. James Brayshaw, b. 1900, master mariner, captain of Mackenzie River paddlewheelers, Hudson's Bay Company western arctic supply ships, the M.V. Lady Rose. Dad passes over a worn page from the Vancouver Sun, dated 1955. A 3500 word account, by oral historian Barry Broadfoot, of a day's journey from the foot of Richmond's No. #2 Road to the Gulf Islands and back aboard the Lady Rose. A black-and-white photograph of Grandpa at the rail. 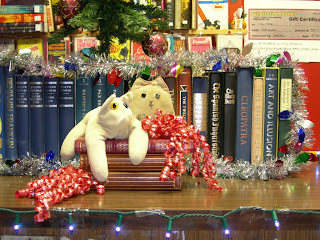 Merry Christmas from me and the Incredible Talking Cats!
- posted by cjb @ 9:53 AM