Nothing But Blues And Elvis, and Somebody Else's Favorite Song
- posted by cjb @ 10:30 PM 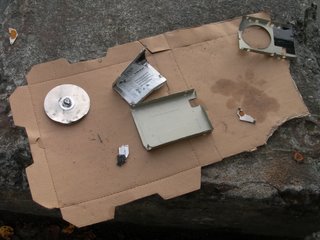 CUSTOMER: Hi. I'd like to return this book for credit [Jay Bonansinga's Twisted, a mass market paperback thriller].

CJB: You just bought it on Thursday. Is there a problem?

VERBATIM: "The statuesque blonde woman in the diaphanous linen top and thong bikini crouched against the raging salt winds, grimacing, struggling with a loop of nylon rope, completely unaware that it was the last time she would secure a storm tarp over her beloved little motel's swimming pool." 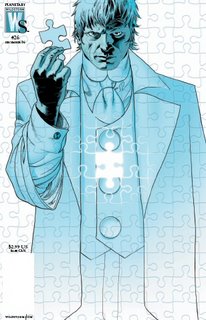 "Look around, Mr. Snow. A crew of superhuman ancestors of the City Zero survivors, saved by you and Miss Hark to pilot a sailing ship of the multiverse itself." 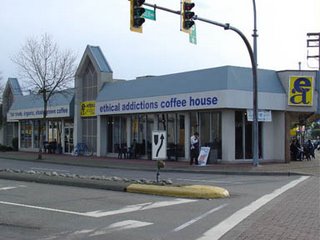 Deep into that New Yorker article from the future, composing, as usual, by wandering around Vancouver's suburbs in the rain accompanied by canvas "duster," fluorescent orange MEC rain hat, lined yellow newprint pad, numerous defective stick pens, and coffee. Once the rough draft is complete, I'll post some excerpts from it.

Also transcribing my Toronto talk on Evan Lee for C. magazine, and writing a short review of Geoffrey Farmer's as-yet untitled installation at Catriona Jeffries Gallery for Montreal's Vie des Arts. So, if the next few weeks of entries simply consist of YouTube links and silly Flash animations, picture me working hard in longhand, somewhere far from the internets' tubes (eg., bustling downtown Langley City, above).

Recent reading: Francine Prose, Reading Like a Writer: A Guide For People Who Love Books and For Those Who Want to Write Them. Prose's clarity, brevity, and generosity of advice remind me of Stephen King's excellent memoir On Writing. Prose might not be happy to find herself compared to "America's favorite schlockmeister," but these two small books, which even physically resemble each other, now sit side-by-side beside Strunk & White and the OED on my recently uncovered work table. Prose and I admire many of the same writers; her close readings of Henry Green, Alice Munro, Mavis Gallant and David Gates are particularly incisive.
- posted by cjb @ 8:01 PM 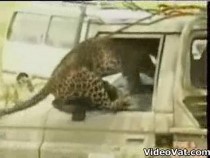 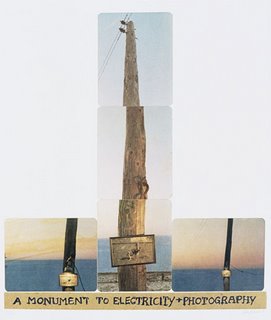 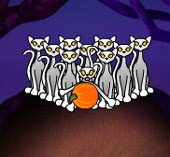 Happy Hallowe'en from me and the Incredible Talking Cats!
- posted by cjb @ 11:52 PM 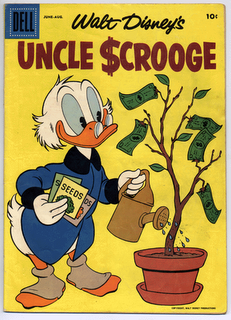 Another game, born of sitting at New Maple Wonton House on Broadway with broccoli beef, hot and sour soup, and a stack of annual reports. Local Art World Luminary slid into the booth opposite me, did a double-take, and tried and failed to reconcile Mr. Hardcore Capitalist with the kinder, gentler cjb that apparently exists in his imagination.

I started stock-picking in fourth or fifth grade (c. 1978? 79?), when Brian Herrin, the best non-university teacher I ever had, asked everyone in my class to construct and maintain a model portfolio for a month. Mine had Imperial Oil and and a few other large-cap TSE favorites in it. We ignored frictional transaction costs (brokerage charges, etc.). I came in third or fourth out of thirty-two or thirty-three participants, and was hooked for life.

In 1989, I was running Anodyne, the short-lived "independent nonprofit art exhibition space" this weblog takes its name from, out of a second floor office in a heritage building on Granville Street. I was open Saturdays and Sundays 12-5pm, and had lots of time between visitors. To pass the time, I paid off my fines, reactivated my Vancouver public library card, and started checking out stacks of books, including Roger Lowenstein's Buffett: The Making of an American Capitalist. This lucid, well-written, and tough but fair biography of Omaha-based investor Warren Buffett is the most life-changing book I have ever read (Appropriately enough, it was agented by Thomas Pynchon's wife, Melanie Jackson). There would be no Pulpfiction Books without it, and definitely no CSA Space.

Lowenstein, a gifted financial journalist and early investor in Buffett's Berkshire Hathaway, Inc., somehow synthesized a whole spectrum of information that I had absorbed but never processed further. He (and, later, Buffett himself, in publications like his Columbia University talk "The Superinvestors of Graham and Doddsville") provided a conceptual framework for me, demonstrating that successful securities analysis is, at heart, a cross between book scouting and art criticism, the sort of thing that I, with my constant depression and weird personality quirks, am apparently well-suited to perform.

A simple public challenge: outperform the TSE (80%+ of Canadian mutual funds don't, on a year-by-year basis). Tonight I took $100,000CDN in play money, and invested it in a number of Canadian companies and income trusts, according to my amateur understanding of "deep value investing" as promulgated by Benjamin Graham, Buffett, David Dreman, Marty Whitman, Irwin Michael, & etc. Anodyne, Inc.'s initial portfolio is as follows:

• This is a serious game, but a game nonetheless. Anodyne Inc.'s positions aren't suggestions to buy or sell any security. I own some of these securities in real life as components of a diversified RRSP portfolio.

• The TSE index figure is included because I aim to beat the index's total return (eg.. growth plus reinvested dividends). There is no speculation involved in buying the index; if I represent myself as a skilled investor, this is a hurdle I should be easily able to clear.

• I will grade my performance (as should you) over a three to five year horizon. Over shorter periods of time, the portfolio may fluctuate in value, sometimes impressively. These short-term variations don't bother me, and they shouldn't bother you, either.

• Despite grading my performance over the medium to long-term, I will report on the portfolio's progress, positively or negatively, once every 3 months.
- posted by cjb @ 8:23 PM

"With Halloween just around the corner, nearly half of Canadians claim they believe in ghosts, according to a new Canada Speaks survey released by Sympatico / MSN. The survey, conducted by Ipsos-Reid revealed that Canadians in Ontario/Atlantic provinces (50 per cent), and those kids in their household (55 per cent vs. 44 per cent among those without kids), are more likely to believe in ghosts. But 32 per cent of ghost-believers feel that ghosts are usually 'forces of good' rather than 'forces of evil' (8%).

Of those surveyed, one in five Canadians say they've been in the presence of ghosts (18 per cent); 9 per cent have lived in a haunted house; 9 per cent have 'visited with the ghost of a dead relative' and 12 per cent have had an 'out-of-body experience' or say they know someone who has (15 per cent)."

Scarce here for a few days, deep into transcribing last week's New Yorker article from the future. Grey October outside, rain moving in from Vancouver Island. Sweater and canvas coat weather, cold late fall air on my shaved scalp. No idea why, after so many years of silence, fiction should present itself again, but I think it has something to do with all these entries here. Three years of scales, then short bursts of improvisation. Zwah be dah be dah... And the Nascanti, 2014's art-collecting aliens, turn out to be a hoot to write. "Maybe they could take [PROMINENT YOUNG CANADIAN ART STAR]," suggests a friend. "Permanently." Not a bad idea, though I suspect they have better taste.
- posted by cjb @ 10:54 AM
Tuesday, October 24, 2006 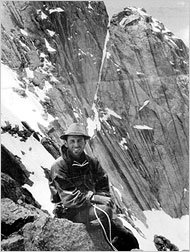 On the express bus, an artworld colleague shows me a handful of autumn leaves, all reds and yellows and greens.

"A person was unlikely to enjoy asking favours from a position of grotesque inferiority." (A.L. Kennedy)

"He stood up and went to the table where he'd thrown his pants over the typewriter when he'd come in last night. He got his wallet out of the back pocket, some folding money out of the front pocket. The change fell on the floor, quarters and dimes scattering over the room in a way that might have resembled the beginning of the universe. It wasn't ten o'clock in the morning and he'd already discovered the big bang." (Pete Dexter)

"Ill equipped and even more ill prepared, Mr. Newby never made it to the top of Mir Samir, though not for lack of imagination. To train for the ascent up the rock-strewn, icy mountain, he spent four days rock climbing in the Welsh countryside. He struck out for Afghanistan armed with British resoluteness, a pair of new boots and an exquisite taste for the absurd.

He also carried a very useful pamphlet on how to climb mountains, which he stopped to read on the slopes of Mir Samir, just a thousand feet from the summit." (NYT obituary of Eric Newby, above, world traveller and amateur mountaineer)
- posted by cjb @ 11:29 AM
Monday, October 23, 2006

"It was almost incidental, what you had for issues. But how you saw things, how physical things went into your eyes and what your brain took and what it threw back, that told you who you were."

The musings of Dexter's alcoholic reporter, Richard Shellburn, the "people's voice," about to compose a long and maudlin essay meant to get himself laid, which unfortunately generates 134 calls of complaint to the paper -- "They're pissing into the phones," says his worried assistant -- and Shellburn's subsequent beating death at the hands of a mob outside the Hollywood Bar.

There is a line of fictional alcoholic journalists that goes straight from Shellburn to the hapless unnamed reporter in Faulkner's Pylon:

"'[I]t's not the living breath of news. It's just information. It's dead before you even get back here with it.' Immobile beyond the lamp's hard radius the reporter stood, watching the editor with an air leashed, attentive, and alert. 'It's like trying to read something in a foreign language. You know it ought to be there; maybe you know by God it is there. But that's all. Can it be by some horrible mischance that without knowing it you listen and see in one language and then do what you call writing in another? How does it sound when you read it to yourself?'

'When I read what?' the reporter said. Then he sat down in the opposite chair while the editor cursed him."

I have a lot of sympathy for these busted losers: Pylon's reporter, who would like to be Hemingway, but somehow lacks style's internal swing, and Shellburn, with his white corpse skin and sexually predatory ways (A typical Shellburn line: "She was a pretty girl, but she wasn't troubled enough to be much of a piece of ass."). Both men are professionally and emotionally crippled failures who still manage, from time to time, to articulate something like aesthetic sense. Shellburn's attachment to "physical things," above, is a good epigraph for the art movements which, for lack of a better term, we call realism. 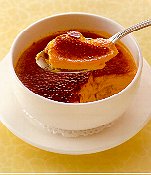 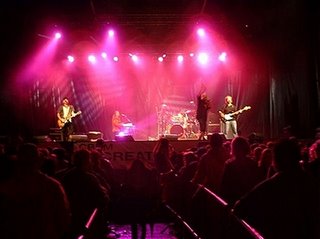 I Rearrange to Suit You

That amazing guitar riff, so reminiscent of 1978 fall Sundays, CKNW 980 on in my parents' red-tiled kitchen, and -- more recently -- of browsing for Abercrombie & Fitch Big Shirts in CTS' crowded aisles. In the air tonight, 12:30 a.m., cjb & the rickety Legacy crossing the Cambie Bridge, heavy sea fog blowing through, the bridge's yellow lamps shining like luminous gas giants, will o' the whisps, ignis fatuus....