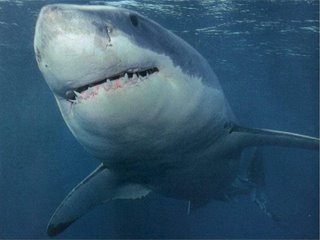 Still Available (Unsigned) at the VAG Gift Shop for $25!

In Toronto for a few days. On Saturday, September 16th, I'll be giving a free public talk on Evan Lee's new photographs at Monte Clark Gallery. Beyond that? Visiting friends and colleagues, riding the Go Train, and ghost-hunting. Back soon.
- posted by cjb @ 3:14 PM
Wednesday, September 13, 2006 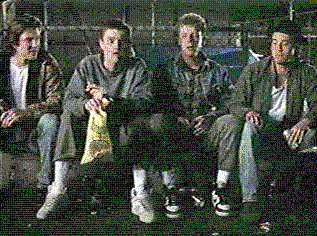 Say Anything -- one of my favorite scenes, John Cusack's Lloyd Dobler a deep and permanent role model

All of the guys are sitting against a wire fence drinking and
eating crisps. As each of them talks, the rest agree with him.

JOE: Lloyd man, no babe is worth it, you know. Listen, hang with us
man, we'll teach you.

GUY 1: Right. Lloyd man, you can't even trust them man, because you
know what it's about? They spend your money, and they tell their
friends everything man, it's bigonomics.

GUY 2: Man, all you gotta do is find a girl who looks just like her,
nail her, and then dump her man, get her off your mind.

MARK: Your only mistake is that you didn't dump her first. Diane Court
is a showpony. You need a stallion, my friend. Walk with us and
you walk tall.

They all say goodbye.

MARK: Later for you, Luke.

LLOYD: I got a question. If you guys know so much about women, how come
you're here at the Gas 'n' Sip on a Saturday night completely alone, drinking beers, no women anywhere?

Is That a Dress My Son is Wearing?

"I left no time to dwell on promises I had no way of keeping...." 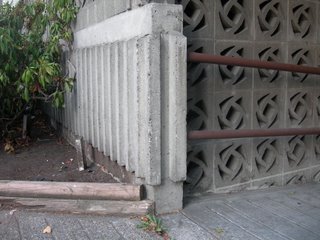 Re-shot this morning on the way to work. Honking SUV behind me once again. Yesterday's version available below for comparison, but even a quick back-and-forth says this one's a keeper.
- posted by cjb @ 9:41 AM
Monday, September 11, 2006 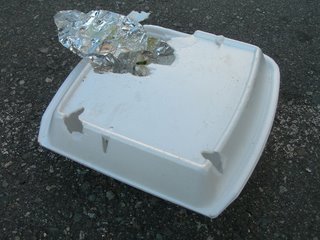 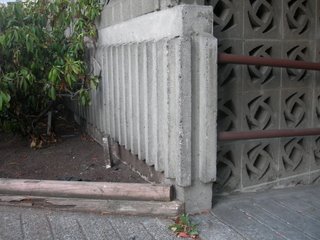 Not depicted: the honking SUV behind me. Downtown Vancouver, 8am, diffuse grey light in all the canyons. Enough to start carrying the camera seriously again, after a hot summer whose harsh flat light wasn't particularly conducive to the kind of pictures I kept trying (and failing) to make.

A scene I walk by on my way to the express bus every morning. At some point it announced itself "as a picture." I don't know what significance it has beyond feeling like the concrete wedge at center most days, full of hairline cracks and propped in place by conflicting social motives. I was thinking, too, of Jeff Wall's Concrete Ball, 2003, and Roy Arden's East Vancouver, 2006 (in the Anodyne archives, 6/9/2006). That tiny strip of blue in the upper left hand corner -- a mirrored-glass building one block down -- strikes me as a defect but I don't know how to eliminate it without pivoting the whole scene around and ruining the torsion, so it will probably stay for now.

I'm going to show some photographs in a rented space above the bookstore in January 2007. Legacy's 5 panels, some of the black and white forest interiors, three ghosts, two Untitleds. Mistakes and failures undoubtedly among them, but at least they're my mistakes and failures.
- posted by cjb @ 2:30 PM 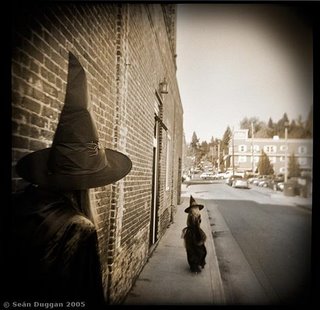 This year, in place of Richard Drew's Falling Man, a big old Happy Birthday to "the Jon Stewart of the Canadian visual art PR world." A complicated in-joke that only two readers are likely to make much sense of.

"Q: I'm so enthusiastic in the prospects for word of mouth for my business, how do I build my own 24/7/365 word of mouth brand community for my brand/my client's brand?

A: We will have somebody contact you and if interested, an account team will sit down in person with you and consult your branded footprint in the word of mouth space."
- posted by cjb @ 10:19 AM