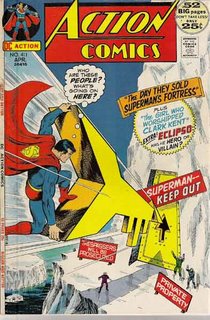 One of a Kind House For Sale!

"The fortress is also fully wired with electrical/phone/plumbing/drains. It also has many secret doors, and a 1-ton blast door at the entrance and a 3-ton motorized door to seal you in and close the fortress to the outside world. There are at least 5 ways to get in/out of the fortress back into the house!"
- posted by cjb @ 10:27 PM 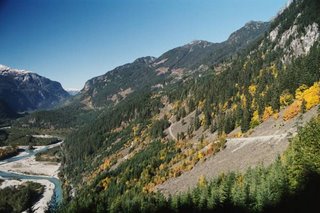 This Must Be The Place I Waited Years to Leave

Stan Lee's Watchmen (thx dru, jnadiger, and the whole rest of the comics-reading planet)
- posted by cjb @ 9:37 AM 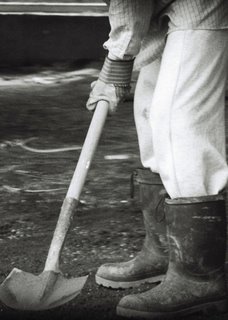 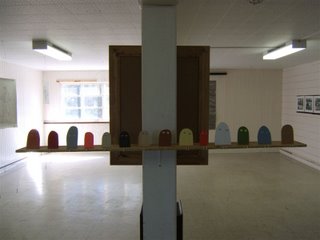 Ghosts haunting the dusty sun-struck basement of a Vancouver Island art college. Ghosts by Caleb Speller, photograph by Tolagson. The Incredible Talking Cats studied this image with closer than usual attention; lots of ITC DNA in these spooky little guys, who also seem distantly related to Jack Shadbolt's owls.
- posted by cjb @ 9:26 AM 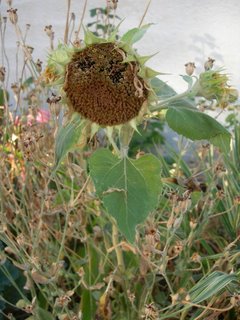 "The subject that haunts is not identifiable, one cannot see, localize, fix any form, one cannot decide between hallucination and perception, there are only displacements, one feels oneself looked at by what one cannot see..."
- posted by cjb @ 6:37 PM
Monday, September 04, 2006

The Bargaining Model of Depression

"When social partners have conflicts of interest, 'cheap' signals of need, such as crying, might not be believed. Biologists and economists have proposed that signals with inherent costs can credibly signal information when there are conflicts of interest. The symptoms of major depression, such as loss of interest in virtually all activities and suicidality, are inherently costly, but, as costly signaling theory requires, the costs differ for individuals in different states. For individuals who are not genuinely in need, the fitness cost of major depression is very high because it threatens the flow of fitness benefits. For individuals who are in genuine need, however, the fitness cost of major depression is low because the individual is not generating many fitness benefits. Thus, only an individual in genuine need can afford to suffer major depression. Major depression therefore serves as an honest, or credible, signal of need."
- posted by cjb @ 6:00 PM 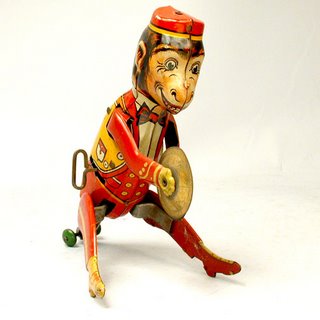 Courtesy Amazon's largest vendor of "penny books." The thought of opening one of these $250 specials makes my lower back hair stand straight up. A boxed-up, freeze-dried version of the world's worst thrift store, like the Goodwill I visited in Akron, Ohio, back in 2004. Sitting there on your doorstep, grinning at you like Stephen King's sinister wind-up monkey.
- posted by cjb @ 9:19 AM
Sunday, September 03, 2006

And while I was typing up that last entry...

HIM: Ponytail, black shirt with a grinning clown's face on it, combat boots.

HER: We're going around asking bookstores about fun stuff to do in Vancouver.

HIM: Y'know, where all the cool bars are.

HIM: Is this a trendy part of town?

CJB: I'm not really a "trendy" kind of guy. Sorry.

HER: What, you just work here and go home?

HIM: You don't have a favorite bar?

HER: What's that supposed to mean? 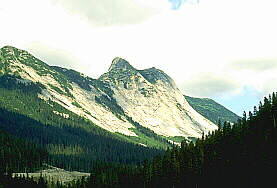 "So we went, as he put it, arseholing down the M6 with the radio turned up full: AC/DC, Kate Bush, Bowie's 'Station to Station' already a nostalgia number. How many times, coming back after a hard day like that, has there seemed to be something utterly significant in the curve of a cooling tower, or the way a field between two factories, reddened in the evening light, rises to meet the locks on a disused canal? Motorway bridges, smoke, spires, glow in the sun: it is a kind of psychic illumination. The music is immanent in the light, the day immanent in the music: life in the day. It is to do with being alive, but I am never sure how."
- posted by cjb @ 10:13 AM

Here's an oldie from the vaults, a piece of short fiction originally written and self-published as a double-sided broadsheet in April 1993 (12 numbered, 2 lettered copies). Probably my scarcest work to date.

The Musician, Descending
By Christopher Brayshaw

I recall the tale of the musician, who loves his wife more than life itself. But a snake bites her, and she dies. The musician is inconsolable; broken-hearted, he wanders the earth lamenting his loss. So beautiful is his song that trees bow down their branches as he passes, and rivers stand still so they can hear.

The gods take notice and appear before the musician; they say, Enough. All things move to their natural ends. Grieve, singer, but understand, and forget her. But he answers, I will not forsake her, and plays on. All earth stands motionless before the wonder of his song.

On the dark side of the stationary globe, men and women shiver in the cold and send up prayers to heaven. The gods hear them and ask again: Singer, leave this madness. And again the musician answers, I will not forsake my love.

One of the gods strikes a heavy staff against the ground. Earth itself shudders and gives way, revealing a staircase leading down. Then go to her, singer, commands the god, in the land of the dead. Terrified, the musician obeys. He descends, and the light of the upper world disappears. Dead things draw near and threaten him in the darkness, but he says to them, Do you not know me?, and they are still as he sings of things left behind in death: sunlight, breath, the touch of a lover's hand.

The musician walks unmolested for six days and nights. On the morning of the seventh day, he reaches the bank of a river and waits until a skiff glides from the darkness to ferry him across. The boatman's hands are bare white bones; the pole they grip leaves no mark in the still dark oily water.

Beyond the river lies the land of the dead. As the musician strides across its open fields, silent shades approach him, and he sings of his quest and his love. As the river fades from view the shades grow more numerous, and press around him, so he is obliged to push them aside, and beneath his hands they feel like clouds of mist, or thickly falling snow.

So thick are the shades that surround him, that when the lord of the dead appears, the musician does not notice him until he speaks: Singer? What do you want?

I have come for my wife, says the musician, and as he speaks he glimpses her among the shades that throng round the lord of the dead.

You may have her, says the lord, for the songs you bring with you are all too seldom heard here, and we are properly grateful for this rare diversion.

Then come, says the musician to his wife, but the lord steps between them. We attach one condition.

That you leave now (says the lord), and retrace your steps to the surface. I promise she will follow you, but the moment you turn to make sure, she is lost to you forever. What say you?

Then go, says the lord of the dead, and the singer turns to leave, and the other shades fall from him as he walks, and the sound of their retreat is like wind through autumn leaves, or waves along a shore.

The musician walks on. Fields and the river, then darkness, and walking through the darkness is like walking deep within his own mind. He moves on, foot after weary foot, mile after endless mile, but with every step he takes, doubt grows within him. There was once a musican who loved. More than life itself. Something's wrong here. Why is love more important than the woman loved? And why does she have no name? And if she drank from that still dark river, is this journey then a second death, a tearing-away from a world grown familiar and loved?

Light gleams up ahead: the edge of the upper world.

All things pass. Hold her whole; love her; let her go. And with that he turns to see her fading in the sunlight, like a last note from a harp, diminishing into air.
- posted by cjb @ 9:31 AM