And no one will have seen and no one will confess
The fingerprints will prove that you couldn't pass the test
There'll be others on the line filing past, who'll whisper low
I miss you, he really had to go
Well, each to his own...
- posted by cjb @ 9:06 PM

"The other wonderful thing about myth and folktale elements is that nearly every story is in segments, which can be taken apart and either recombined or included on their own. In this form they carry the same weight but their meaning often alters. I first grasped this at the age of about eleven, when I was allowed to read a scholarly book when I was ill (‘but don’t dare get it crumpled!’), which was mostly sixteen versions of the same Persian folktale – the one where the younger prince fetches the princess from the glass mountain – placed in such an order that, as the details of the story altered, you watched it changing from one sort of narrative (the trial of strength and valour) to another (the test of character), while the outline of the story itself never changed. This kind of thing fascinates me. When I was a student I imagine I caused Tolkien much grief by turning up to hear him lecture week after week, while he was trying to wrap his series up after a fortnight and get on with The Lord of the Rings (you could do that in those days, if you lacked an audience, and still get paid). I sat there obdurately despite all his mumbling and talking with his face pressed up to the blackboard, forcing him to go on expounding every week how you could start with a simple quest-narrative and, by gradually twitching elements as it went along, arrive at the complex and entirely different story of Chaucer’s Pardoner’s Tale – a story that still contains the excitement of the quest-narrative that seeded it. What little I heard of all this was wholly fascinating."
- posted by cjb @ 8:44 PM 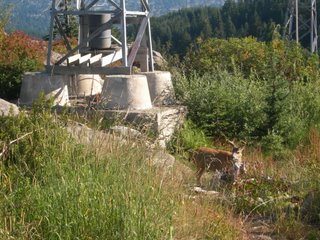 Another 1231m climb from sea level, this time from West Vancouver's Ambleside Park, where I left the Legacy in the early afternoon, post-Air Care.

Three bucks freeloading on the summit, with a crowd of onlookers:

TOURIST #1: (pointing) There aren't as many points on her antlers, see?

New Kem Nunn interview -- one of my faves, author of The Dogs of Winter, Unassigned Territory, the Wild Things screenplay, and numerous Deadwood episodes...

"Q: Something I've thought about, and it seems almost particular to California novels, if you read something like Nathanael West's Day of the Locust, Horace McCoy's They Shoot Horses, Don't They?, What Makes Sammy Run?; they're not 'crime' novels, but they're 'California' novels, and they seem to have sort of a 'crime' edge to them without formally being genre novels.

KEM NUNN: Yeah. One of the novels we talked about tonight (at the Q&A after the reading), [Newton Thornburg's] Cutter and Bone gets into that. John Fante, some of his work… Some of that comes, I think, out of this desire to write against the myth of California. California has always trafficked in its own myth. You know, from early on, with books like Ramona by Helen Hunt Jackson, with its idyllic vision of the Indians and the padres. The mission life - there was a whole 'mission style' that grew out of that.

Some of the early noir writers, guys like James M. Cain, were guys that came to California to work for the studios, and became disillusioned with what they found here, and wanted to write against that myth. They came believing that everything would be great, and then discovered that there were shadows: discovered that in fact, L.A. was a rabidly anti-union town, that there was a lot of racism. You find that in Chandler - the corruption in the police force is something that always gets in there. So I think there's that desire to somehow write against the myth that's informed a lot of the noir writing, and accounts for some of the stuff you're talking about."
- posted by cjb @ 11:36 AM
Wednesday, August 30, 2006

That Thin, That Wild Mercury Sound

"Q: You hear the sound of the street?

Q: You mean if a jackhammer were—

A: Yeah, no jackhammer sounds, no airplane sounds. All pretty natural sounds. It’s water, you know water trickling down a brook. It’s light flowing through the . . . 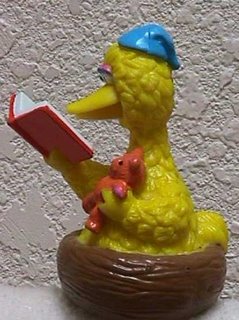 1. This is a pretty mainstream list, the sort of thing that could be safely assembled at your local Chapters/Indigo or Borders. That said, where's Ursula K. LeGuin, Zadie Smith, Jhumpa Lahiri? 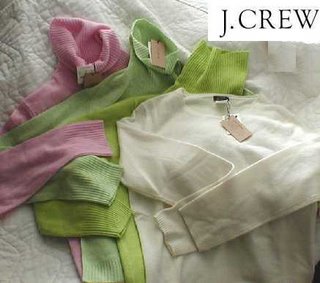 Wednesday morning, leaves skating along in the gutter, clouds furling off Crown Mountain's summit. The city's sewer crews and paving crews expertly blocking Main and Broadway like a professional NFL team, no one getting through. Deep vibrato of jackhammers, of front-end loaders shifting and collecting huge chunks of excavated pavement, of tamping machines trundling along behind the dump trucks spilling steaming, stinking asphalt into the open trench I plunge-stepped into this morning, illegally crossing mid-block. Lost kids trudging up and down Broadway, looking for the 99 B-Line express bus stop that wanders through the neighborhood like the magnetic pole.

Today's incongrous Internet research juxtaposition: Dotski's scoop-neck, "bright primary color" fashion fetish (scroll) vs. the lovely synth-pop set playing over at All The Little Live Things. That instrumental break from 2.17-2.41 stopped me dead with a whole spectrum of feelings I had just assumed were permanently gone.
- posted by cjb @ 9:16 AM
Monday, August 28, 2006

Someone stateside writes to suggest that my insinuation, this morning, that lessons learned from the U.S. military's adventure in Iraq are also applicable to running a used bookstore is evidence of my classism, conservatism, "false consciousness," and numerous other, even more poorly argued charges.

Maybe. But consider the following.

DIRTY SCABROUS CRACKHEAD #1: [eating a McFlurry; lines delivered around a mouthful of ice cream and caramel sauce] I got a great record here...a guy said I should bring it in. [Proffers completely trashed Beatles LP in a dirty, mould-ridden sleeve].

CJB: Thanks, but I'm not buying any records right now.

DIRTY SCABROUS CRACKHEAD #2: [also eating a McFlurry] The guy said he should bring it in!

CJB: Thanks, but no. I'm not buying any records at the moment.

DSC#2: Fuckin' kick his ass...fuck him up... [Exits store; throws McFlurry against the window]

"Major Wilson, the historian and 101st planner, later concluded that much of the firing on U.S. troops in the summer and fall of 2003 consisted of honor shots, intended not so much to kill Americans as to restore Iraqi honor. 'Honor and pride lie at the center of tribal society,' he wrote. In a society where honor equals power, and power equals survival, the restoration of damaged honor can be a matter of urgency. But that didn't mean that Iraqis insulted by American troops necessarily felt they had to respond lethally, Wilson reflected. 'Honor that is lost or taken must be returned by the offender, through ritualistic truce sessions, else it will be taken back through force of arms.' In Iraq this sometimes was expressed in ways similar to the American Indian practice of counting coup, in which damaging the enemy wasn't as important as demonstrating that one could. So, Wilson observed, an Iraqi would take a wild shot with a rocket-propelled grenade, or fire randomly into the air as a U.S. patrol passed. 'Often the act of taking a stand against the "subject of dishonor" is enough to restore the honor to the family or tribe,' whether or not the attack actually injured someone, he wrote."

Thus, cjb, enlightened, makes no further response, and DSC #1 and #2 exit the premises. No name-calling, no fistfight, no 911 call, no broken window. Peace reigns. Thanks, Thomas Ricks!
- posted by cjb @ 8:32 PM

I wasn't on this trip, but I sure wish I had been. BW5+ on the Cascade Bushwhack Rating Scale. Check out all 3 installments of the trip report, plus pictures!

FEMALE CALLER: Do you have [OBSCURE TITLE] by [AUTHOR'S NAME]?

CJB: I don't recognize that title. Can you tell me anything about it?

CJB: OK, hold on, please. [Searches on-line]. Hello? No, I'm afraid we've never had that one through.

FC: It's a bestseller!

I think this may be the silliest and most poorly conceptualized paragraph of art writing I have ever read. Received wisdom city, baby! (Eccentric punctuation and capitalization preserved unchanged from the original).

"Since at least the Renaissance, Western civilization, its History and Culture have been promulgated and imposed from a single-point perspective, from the point of view, the privileged position, of the enfranchised European heterosexual white male. The global technologies of our era, which are the outcome of this single-point perspective, have been reductive, totalizing and oppressive, if only because they inscribe universalized versions of humanity, institutions, and power relationships within a relentlessly material and singular and seamlessly teleologic History."

About half way through Thomas F. Ricks' superb Fiasco, the best account of the ongoing conflict in Iraq I've read. Detailed reporting, and an even more impressive critical synthesis of that reportage. Essentially a 500-page "briefing book" whose strategic lessons are as applicable to running a chain of used bookstores as they are to occupying and pacifying a hostile foreign nation. The book bristles with insights, including many like the following:

"The Army War College, the service's premier educational institution, became a leading center of dissent during the occupation period, with its analysts issuing scathing reviews. Containment of Iraq had worked, while the Bush administration's hadn't, argued a study written by Jeffrey Record and published by the War College's Strategic Studies Institute. He argued that a war of choice had been launched that distracted the U.S. military and government from a war of necessity in Afghanistan and elsewhere that already was under way. 'Of particular concern has been the conflation of al Qaeda and Saddam Hussein's Iraq as a single, undifferentiated terrorist threat,' Record wrote.

This was a strategic error of the first order because it ignored crucial differences between the two in character, threat level, and susceptibility to U.S. deterrence and military action. The result has been an unnecessary preventive war of choice against a deterred Iraq that has created a new front in the Middle East for Islamic terrorism and resources away from securing the American homeland against further assault by an undeterrable al Qaeda. The war against Iraq was not integral to the GWOT (Global War on Terrorism) but rather a detour from it.

The unexpectedly difficult occupation, Record added, had 'stressed the U.S. Army to the breaking point.' This was not some politician or pundit offering that assessment but an official publication of the U.S. Army."
- posted by cjb @ 8:53 AM
Sunday, August 27, 2006

After some hesitation, Anodyne migrated over to Blogger's new platform this afternoon without a hitch.

The new publishing interface is still in beta, and may generate numerous weird errors for months to come.

Please email me if you observe ongoing strangeness (layout issues, non-displaying photographs, gibbled fonts, & etc.) or if posting seems to inexplicably cease for more than a day or two at a time. Thanks!
- posted by cjb @ 2:04 PM

Up with the sun, ghost-hunting in the West End's alleys, the grey pre-autumn slant light more aminable to pictures than July's hot sun. To a fruitless estate call by bus on Friday, down Nanaimo below East Hastings. The North Shore's mountains, blue-grey, bone-dry, above chestnut trees and maples, their green leaves bleached by the summer's heat. Scuffling along, sneakers crackling through fall's first evidence, past whirling sprinklers, a glass truck, parked pickups. The amplified tinkling of an ice-cream van, two blocks over, circling the park.

Forty boxes under a back porch, dusty and duct-taped, haphazardly stuffed with hardcover remainders that no one in their right mind would ever want to buy (Elizabeth Jolley, Cynthia Ozick, 80s Saul Bellow, Nadine Gordimer, Shampoo Planet, Paul Theroux novels, & etc.)