SFX: SMASH! (Car being broken into)

SFX: CRASH! (Bottles thrown off tenth-floor balcony onto the street)

"No phone call, no muffin basket, no flowers, nothing." 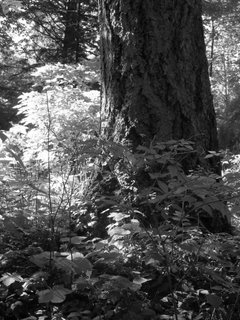 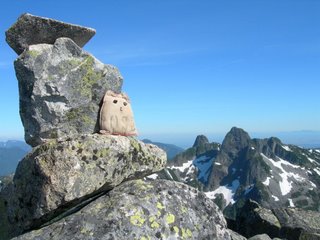 A free evening! I opted to spend it doing several loads of laundry and cleaning the apartment.

Some time between putting my last load in the dryer and coming back downstairs to claim it, some mangy crackhead

a/ Snuck into the basement (swipe card guarded door),

b/ Tore the basement security camera off the ceiling,

c/ Tore the laundry room security camera off the ceiling,

d/ Stole all my laundry (numerous Abercrombie & Fitch Big Shirts ($4 each at the Seattle Goodwill, not exactly ebay-able), socks, etc.), and,

e/ Stole the 12 pairs of boxer shorts drying in the dryer next to mine. 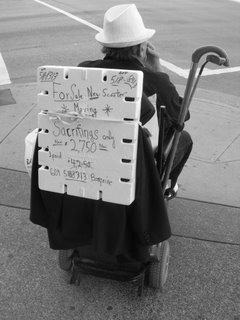 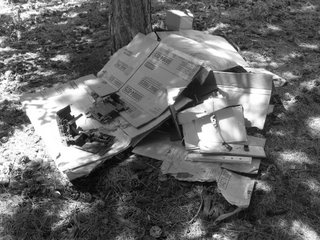 Up at 5:30am, I park out on the balcony with a cup of tea and J.M. Coetzee's Elizabeth Costello. Light slowly leaks up into the sky. A cool wind rustles the trees. The neighborhood pigeons dip and flow. An adolescent crow calls, monotonously, off-key, for breakfast.

A guy with Car Thief written all over him (unshaven, ball cap, track pants, swag bag) sneaky-petes it down the sidewalk. He stops in front of the nice red late-model Honda parked directly across the street. Looks left, looks right. Scoots around to the passenger side, pops something heavy from his bag, and smashes the passenger window.

The Honda's car alarm goes off, hoot hoot hoot. I rise to my feet, heading for the phone and 911...

...and the curtains of the second-floor unit across the street whip back. An extremely fit-looking man in his mid-40s, clad only in boxers, vaults over his open windowsill, takes the fourteen foot drop to the lawn, sprints toward his car, and proceeds to beat Mr. Car Thief senseless. 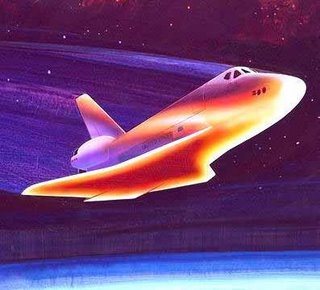 "Colonel Lindsey said he and the pilot, Commander Kelly, had had a view on the way home that was even more spectacular than usual.

'It started out in darkness, and of course you see the orange glow as the plasma starts heating up,' he said, referring to the superheated gases of re-entry into the atmosphere. 'And you can see what looks like explosions out the windows, plasma flashes and things like that.' 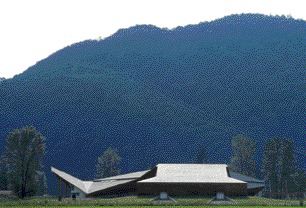 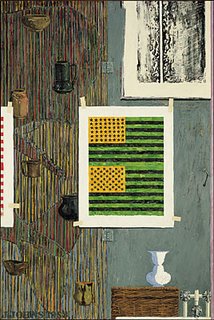 I like Johns' signature trick of "taping" favorite objects onto paintings, seen to good effect here. Also his numerous reverals and cascading series of manipulations of the picture plane. In order: the Barnett Newman print at upper right, reversed as if in a mirror; the green and orange optically reversed "double monoprint" of the U.S. flag at center; its optically correct twin at center left; the floating George Ohr pots hovering restlessly above Barry Moser's Moby-Dick; strips of beige encaustic "masking tape"; and finally, the painted nail at center right -- which I think Johns borrowed from Zuberan -- that throws the relationship of all these layered surfaces into chaos. Note, too, the trompe-l'oeil hinges dividing the "Barry Moser" side of the picture from the "Barnett Newman" side, their implication that the solid canvas could fold back on itself like a piece of paper.
- posted by cjb @ 11:23 AM 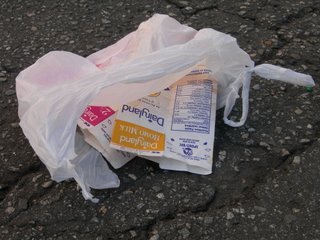