Another week, another Coetzee. Slow Man is nominally realistic; it tells the story of Paul Rayment, an unhappily divorced middle-aged ex-photographer and photography collector who loses a leg in a cycling accident and then slowly becomes infatuated with his middle-aged Croatian nurse, a happily married woman who has no feelings for him outside of the basic goodwill any care attendant bears toward a charge. Then, approximately halfway through the book, everything changes. A visitor arrives on Rayment's doorstep: Elizabeth Costello, a middle-aged experimental Australian novelist, a woman who never seems to eat, who apparently has no place to stay, and who claims that Rayment and his nurse "came to her," and that she is now simply waiting for their lives to unfold. Metafiction? Not quite: Cotezee delivers all of this straight-up, without the nudging and winking asides characterizing the work of writers like John Barth, Donald Barthelme, David Foster Wallace and Dave Eggers. There is no pivotal moment characterizing Elizabeth Costello as a ghost, spirit, or Coetzee himself; everything she says and does could, conceivably, spring from some naturalistic source. Like James' Turn of the Screw, Slow Man hovers on what Duchamp called an "infra-thin boundary," a place where an interpreter's predelictions and beliefs can definitively shove ambigously presented evidence one way or another. An excellent novel, whose thematic density belies its two hundred-some-odd pages.

"Critics have been assiduous about mining Johns' images for iconographic sources. He has encouraged this, in a way, because many of his moifs -- the U.S. flag, the Mona Lisa, an abstracted flagstone pattern, and others -- are quotations or appropriations of preexisting images. Among these are several made by tracing reproductions of works by other artists, a practice he seems to have begun in the late 1970s with a copy after a Cezanne painting. . . .These motifs, at first unindentified, were puzzling to viewers. They clearly indicated something specific, but the referent was illegible. Johns intended this: as he later explained, he was interested in the articulation of the figures as line in space. 'Looking at [reproductions of the Isenheim Altarpiece], I thought how moving it would be to extract the abstract quality of the work, its patterning, from the figurative meaning. So I started making these tracings. Some became illegible in terms of the figuration, while in others I could not get rid of the figure. But in all of them I was trying to uncover something else in the work, some other kind of meaning...'"

Off in the early evening, a walk down and across the Cambie Bridge, July sunlight on False Creek's new glass towers.

Into Book & Comic Emporium to see my friend Gavin, the store's manager.

Midway through the conversation:

YOUNG MAN HOLDING VHS COPY OF AMERICAN HISTORY X: Can I take this now and pay you Wednesday?

G: Thing is, I've never seen you before. Sorry.

YM: There's no trust in this whole fuckin' world! 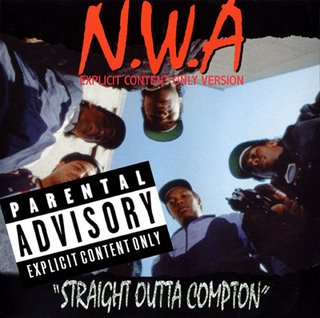 Postmodernism in action. Thanks, jnadiger! 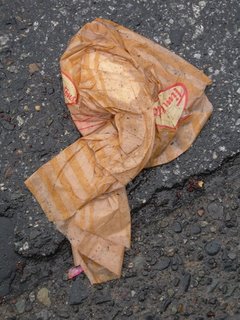 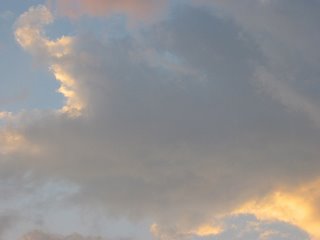 "Vying amongst treetops and other earthbound debris in an attempt to photograph the skies, I think of a story a bookseller named Garvin handed along. Common breed of wingbag used-book dealer, opinion-plagued, borne up astride an oceanic font of 'useless and pointless knowledge.' He related how one photographer—W. Eugene Smith is who I recall—up on a house ladder for a shoot of something or other, could see exactly the angle needed for the shot, out there, in mid-air. So, with camera, he jumped, fired the shutter, got the snap, and fell, fracturing a leg in the fall."
- posted by cjb @ 9:51 AM 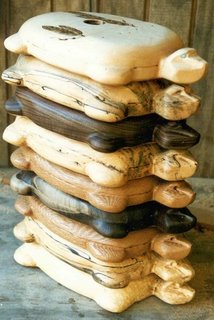 "Maybe there should just be...oh, say, thirteen ghosts," suggests an artist whose opinion I can't casually discount. "Maybe you need to think harder about what constitutes a good picture." Turtles all the way down! Operative subtext: Do you really know what you're doing? Fuck no. To paraphrase Jasper Johns, I guess I just decided to quit becoming an artist and just to be one. I try the distinction out on an increasingly skeptical Tolagson over lime margaritas and too much salt at the bistro down the road, but the Hopperesque sunglow on the building across the street distracts me and I find myself trailing off into an increasingly lengthy series of ellipses. The room's too hot and the double shots of tequila don't help. I keep fiddling with the crushed crescent of lime at the bottom of my glass and wiping the sweat from my eyes. The point of the exercise is to externalize something inside your head, to get it out, so you can handle it, scrutinize it, see if it holds up. One's head -- well, my head -- is not a particularly healthy place to be. Should I be writing proposals for art shows and production grants, or making things and inflicting them on the world? You've lost me, says Tolagson, wondering why he ever agreed to a "meal" consisting of 90% alcohol and 10% pasta. Look, I ask, when you ordered that print from Stephen Gill, who wrote back to you? His gallerist? His assistant? No, he did, says T. Had you ever met him before? No. Well, that's a genuinely new "cultural moment," then, as amazing in its own way as Latta's Clouds.
- posted by cjb @ 9:06 AM
Monday, July 10, 2006 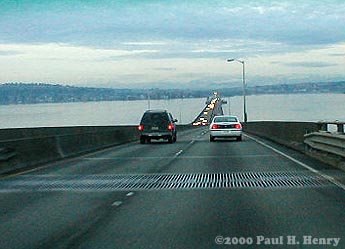 There is a Light and It Never Goes Out

"Creating an emotionally muddled, cantankerous, baroque, funny, longing, introspective, world-critiquing album is the most personal act a man like Morrissey makes. It trickles down to the logo on the cover, the resuscitated Attack imprint, a vinyl reggae label that has no relation to his music, yet reflects the taste and scholarship and attitude of man who began his career in music writing geeky teenage letters to NME begging for better New York Dolls coverage."
- posted by cjb @ 11:54 PM

Okay, that's all of them. So if we're talking and I suddenly seem to fade out into cloudcuckooland, chances are, one of the culprits below is to blame.
- posted by cjb @ 10:38 AM 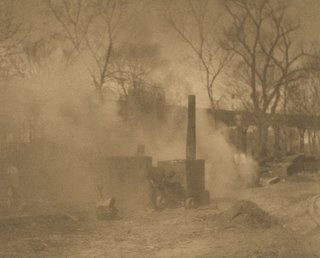 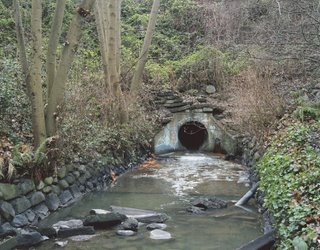 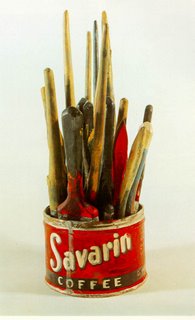 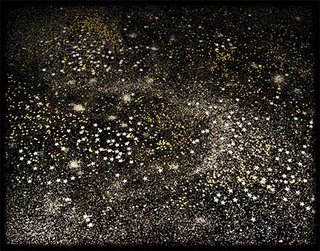 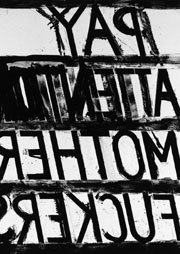 A huge reproduction of this lithograph dominated my cubicle in the Vancouver Art Gallery's curatorial offices, c. 1997-8, and still neatly encapsulates my cordial working relationship with most of my curatorial and administrative colleagues.
- posted by cjb @ 9:45 AM 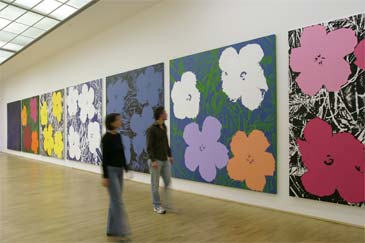 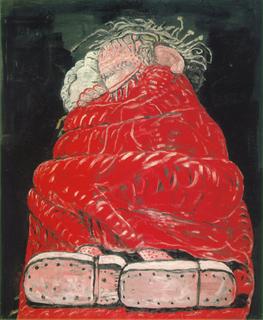 Up at dawn, the ropes attached to the painters' movable scaffold struck against the balcony railing by the wind, tonk, tonk, tonk. An aeolian clock! Deep grey clouds, green treetops thrashing below. Rain overnight, still beaded on the Subaru's dirty hood. Little deltas in the windshield dust. I look like the car these days, like Guston's sleeper, with his scrambled hair and speckled ankles. Hair sprouting in places it never sprouted before: ears, neck, the joints behind my knuckles. Some grey now in the bushy patches of hair above my ears and the sideburns, silver threaded through chocolate brown. Heat makes my hair grow like the wisteria on the balcony. Twenty minutes with a razor every morning, yet by three o'clock I walk back to the bathroom to fill up my nalgene bottle and find myself gazing at a figure who looks like a cousin of Guston's Nixon, black stubble sprouting everywhere from roughly cratered flesh.
- posted by cjb @ 9:14 AM
Sunday, July 09, 2006 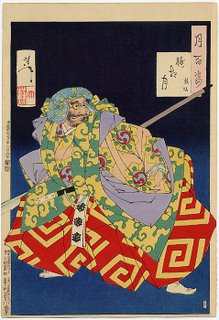 The ghost of the bandit Kumasaka, in full Noh robes, returned however briefly to life and charging around in the moonlight. The first Yoshitoshi print I ever saw (in an otherwise mediocre "Vancouver Collects" show at the VAG -- Claude Breeze, William Morris, late Andy Warhol portraiture, yawn) and one of probably half a dozen artworks that I think about almost every day. Michelina's friend and protector Monkey is largely based on Kumasaka, a character who only looks ridiculous, and one who, so far as I can tell, is totally oblivious to the idea that anyone could mistake him for anything other than a husky, virile, square-jawed warrior.

For the record, those other "almost daily" artworks are as follows:

A little boy, four or five, carefully inspects the white plastic rat in the front room. He strokes its tail, its back, its ears, its whiskers. Then taps its tiny feet -- one, two, three, four -- and draws the wrong conclusion: "Kitty!"
- posted by cjb @ 9:56 AM