"HANNA: So, you never wanted a regular type life?

MCCAULEY: What the fuck is that? Barbecues and ballgames?

MCCAULEY: This 'regular type life,' is that your life?

HANNA: My life? No. My life...no, my life is a disaster zone. I got a stepdaughter so fucked up because her real father is this large-type asshole. I got a wife; we're passing each other on the down-slope of a marriage, my third, because I spend all my time chasing guys like you around the block. That's my life.

MCCAULEY: A guy told me one time -- don't let yourself get attached to anything you are not willing to walk out in on 30 seconds flat if you feel the heat around the corner.

Now if you're on me and you got to move when I move, how do you expect to keep a... a marriage?

HANNA: That's an interesting point. What are you -- a monk?

MCCAULEY: I have a woman.

HANNA: What do you tell her?

MCCAULEY: I tell her I'm a salesman.

HANNA: So, then, if you spot me comin' round that corner, you just gonna walk out on this woman? Without sayin' goodbye?

MCCAULEY: Yeah. It is what it is. It's that or we both better go do somethin' else, pal.

HANNA: I don't know how to do anythin' else.

MCCAULEY: Neither do I.

HANNA: I don't much want to either.

MCCAULEY: Neither do I...

HANNA: You know, we're sittin' here, you and I, like a couple of regular fellas. You do what you do, I do what I gotta do. And now that we've been face to face, if I've been there and I got to put you away, I won't like it, but I'll tell you, if it's between you and some poor bastard whose wife you're gonna turn into a widow, brother, you are goin' down.

MCCAULEY: There's a flip side to that coin. What if you do get me boxed in and I've got to put you down? Because no matter what, you will not get in my way.

We've been face to face, yeah. But I will not hesitate, not for a second.

HANNA: Maybe that's the way it'll be. Or who knows? 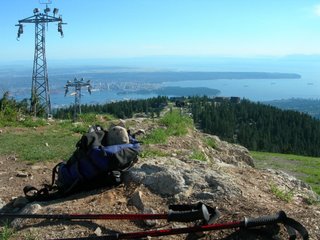 Rose T. Cat, Grouse Mountain summit, elevation 1250m., climbed from sea level on the 28th and 29th of June (well, just to the chalet on the 29th, visible above, dead center). Terminal City and harbor beyond, Vancouver Island and the Gulf Islands blue on the far horizon. A nice breeze rising up off Capilano Lake (nb. that windsock, erect on the second tower), cooling 30 degrees Celcius down to the much more liveable mid-twenties.
- posted by cjb @ 8:50 AM 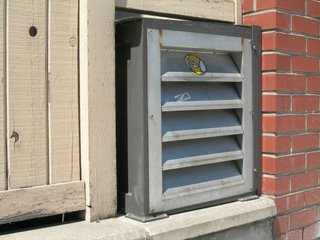 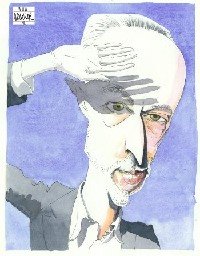 Recent reading, notable titles in red as usual, most completed on the deck at my parents' place on Bowen Island, or some combination of ferry and bus on the way to and from Bowen.

J.M. Coetzee, Waiting for the Barbarians

Ron Suskind, The One Percent Doctrine

I first ran across Coetzee's Disgrace on a "contexts for my work" list Jeff Wall wrote for his recent Tate Gallery retrospective. Faced with a line-up including Kant, Hegel, and every volume of Proust's Remembrance of Things Past, I opted to begin in the shallow end of the page-count pool: Bresson's Notes to the Cinematographer (aphorisms; fragments) and Disgrace. Disgrace begins by recounting a typical middle-aged male academic's brief and unhappy liason with a student, then takes a screaming left turn into political allegory about sixty pages in. Its final paragraph, which describes its protagonist relinquishing an injured young dog he loves to the euthanasist's needle, is one of those moments that quieted me on the morning bus. My heart keeps missing a beat. Well, yes, as if one of those less friendly ghosts of mine had materialized there, in that packed cattle-car. Pointing. Saying, We could relinquish you. 8a.m. sun, Broadway's camera shops and Thai restaurants and Dairy Queens reeling past, the low, constant buzz of conversation and Coetzee's narrative like an echo of that ghost's grim verdict: In the end we will all relinquish you.

So, no red boldface for Disgrace. But I Wikipediaed the bibliography, most of which I'd never seen, and started looking. Waiting for the Barbarians, purchased in Calgary on the way to Banff for the comics conference, is a masterpiece. This strange allegorical book, which recounts the life of a frontier magistrate in the pay of an unnamed internally collapsing empire, and his act of witness as his outpost slowly melts into the shifting sands it was founded upon, reminds me of Kafka's best parables, and the Cormac McCarthy who wrote Blood Meridian. It's a remarkable novel. The Kafka comparison isn't overstated; Barbarians is as well-written, as merciless and as clear-eyed as any of Kafka's work. Read it!

Youth, which I finished last night, is a lesser but no less well written book, a thinly fictionalized account of Coetzee's emigration from South Africa to London as a young man. I red-bolded it, too, while recognizing that, objectively speaking, it's not up to Barbarians' standard. How could it be? Most writers are lucky to have a single masterpiece; not everyone's career flops an ace-high flush. Most of us must be content with a single or two pair. But certain parts of Youth struck deeply with me: the narrator's acute provinciality, his sense of always somehow pacing a step or two behind the the avant-garde. And Coetzee's London is as grey as Vancouver in November, all sulphurous, chilly fogs and freezing rain.
- posted by cjb @ 1:26 PM 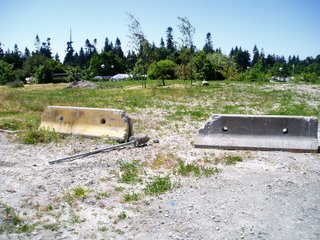 "Anyone can photograph a ghost!" Dru spotted these spooky characters (#101 & #102, respectively) yesterday out at UBC. A picture I'd be proud to make, those skinny trees in the middle distance a particularly nice Corot-ish touch.
- posted by cjb @ 11:03 AM
Sunday, June 25, 2006 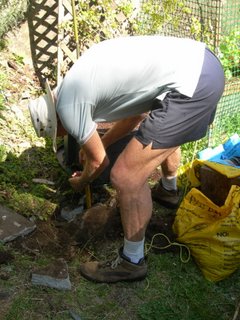 Waste My Time, Please -- yet another gripping episode

CJB: What are you proposing to sell me?

[60 seconds of silence. CJB hangs up]

FC: The author's name is Roger.

CJB: And his last name?

CJB: Well, I'm not buying any of Roger's books at the moment. Thanks for calling.

FC: Your ad doesn't say that!

CJB: What, that I don't buy books by Roger?

FC: That's right! You should put that in, so you don't confuse people.

CJB: I'll get right on that.

Out on the sidewalk:

LULULEMON CLAD UPWARDLY MOBILE YOUNG WOMAN (to friends): That's the restaurant where I had my New Year's Eve date -- you know, where we broke up!
- posted by cjb @ 10:11 AM

Jamie Tolagson checks in from Victoria:

"About that article in Canadian Art: It seems like it should be obvious to anyone at this point that photography did away with the kind of subject-hierarchies that are implied by a phrase like 'garbage is garbage' sometime around the 1920s, if not earlier. The idea that there are worthy subjects and unworthy subjects is so hilariously antithetical to the very idea of art (and especially photographic art) that it seems degrading to even have to respond to such a claim. It's the kind of opinion you'd expect to read in the letters section of the Province, not in a national art magazine. . . .Garbage is garbage? A pepper is also a pepper, that didn't stop Weston from making a photograph of it that most people had no trouble calling art. It feels ridiculous to even type something so self-evident. But why stop there? A flag is a flag, a jukebox is a jukebox, a starry night is a starry night, a human face is a human face! Replace the word 'garbage' with any other word and let the phrase put an end to art history as we know it!"
- posted by cjb @ 9:50 AM