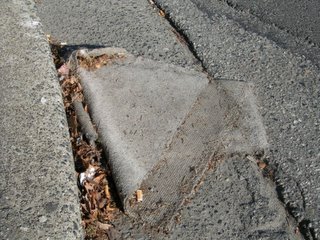 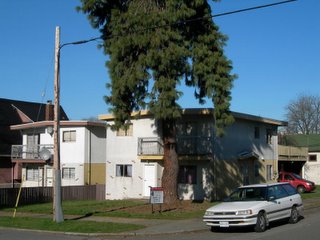 In 1993 or 1994, I bought, for $15, at MacLeod's Books on Pender Street, a copy of the VAG exhibition catalog, Jeff Wall: 1990. Back then I was finishing up an English Honors degree at UBC and had zero interest in visual art, but I knew that one of my thesis advisors, Roger Seamon, liked Wall's photographs and had written about them, and I thought the catalog might make a nice end of term gift.

In the end, Roger never got the catalog, because I started leafing through it. A lot of landscapes I immediately recognized from riding Skytrain, or wandering aimlessly around East Vancouver. The BC Tel building. The Georgia Viaduct. New Westminster's Schara Tzedeck Cemetery. East Hastings Street. All drenched -- at least in my imagination -- in that curious flat grey West Coast light.

Up until then, I think I had always somehow unconsciously associated "high" art with huge cosmopolitan cities -- Paris, or New York, or London. It had never occurred to me that the things I saw and experienced every day might be valid art materials, or that anyone outside of Vancouver would ever accept them as such.

In 2000, the Or Gallery organized a loosely curated fundraiser, Knock Off, whose invitees were requested to remake, mash up, or baldly plagarize a work or works of their choice. I still think that this is the best exhibition I have ever seen at an artist-run center, both for the invitees' choices, some well-known, others totally obscure, and for the complex, subtle, and often moving ways that the choices spoke about the invitees' own work.

Also in 2000, my friend Kevin Schmidt participated in a group exhibition I organized for the Surrey Art Gallery by photographing his rustbucket Chevrolet station wagon against five different "super, natural" landscapes, a la the SUV ads that run during Hockey Night in Canada.

In September 2005, my brother Drew sold me his old Subaru Legacy (340000 kms!). I liked driving again, after 15 years of taking the bus, and I liked the car a lot; it seemed to have acquired a personality in the course of its passage through time.

In October 2005, I drove out to North Burnaby with my new digital camera, spurred by a dim memory of a Vancouver International Film Festival documentary in which Wall described making Coastal Motifs, still my favorite of all his photographs, by erecting a view camera on the roof of his elderly car. My idea was to make a 35mm. study of the same landscape. Learn by doing, & etc. Most of the "study" pictures didn't work out too well (you can see some of them in the Anodyne archives). One exception was a portrait of the Subaru, made right at the end of the day in much the same spirit as Manet's portrait of his elderly parents: a representation that recognizes that its subject(s) are not going to be around forever.

I am a frequently depressed and gloomy guy, but making Legacy's five panels was the most fun I have had in years, even when being chased by a big mean Chow Chow down River Road, or stopped by the Burnaby RCMP. So, thank you JW, KS, and DB. Without whom, & etc. Thanks.
- posted by cjb @ 11:59 PM 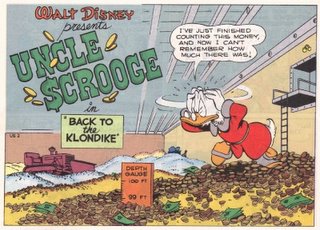 "The Secret Millionaire's Club, currently in production, will consist of 13 titles with the first two titles scheduled for release in Fall 2006. The series, featuring the words, voice and likeness of Mr. Buffett, will focus on financial lessons utilizing kid-relatable characters and real world situations, as well as entertaining adventures."

"An unscrupulous developer buying up properties in Omaha is foreclosing on the rundown local Youth Center. Its last four members are cleaning out the attic when they find a box of old sports memorabilia- among other rare and valuable items. They put everything up for bid on an online auction service -- and make millions! After they pay off the mortgage on the center, the 'secret millionaires' ask local celebrity Warren Buffett for advice on how to invest the money.

With Warren's help, the four kids meet secretly to decide what local companies and businesses to invest in. Each week, Warren guides them to discovering new aspects of his investment philosophy, by using the Socratic Method to help them put his rules into practice, and helps them learn sound financial management skills -- like avoiding debt!

At the same time, the kids become involved in adventures as they deal with dishonest owners, corrupt accountants, security guards, corporate raiders, crooked politicians, and, of course, the unscrupulous developer."
- posted by cjb @ 10:43 PM
Wednesday, February 08, 2006 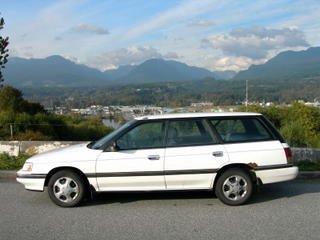 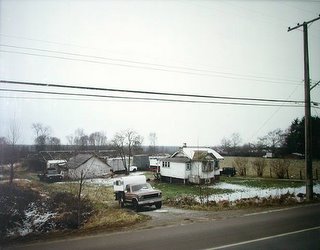 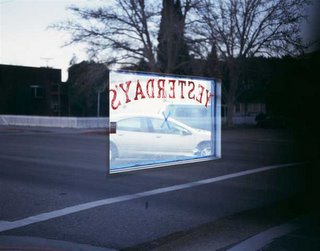 New art-crit here, proof that I haven't dropped off the face of the planet yet.

"Tolagson’s is a different kind of picture. In it I hear the voices of older European photographers like John Gutmann and Robert Frank, whose best work was made in America, but always from the perspective of an outsider looking in at a foreign culture. The photographs collected in Frank’s The Americans could have been taken by Walter Tevis’ Man Who Fell to Earth; they feel like the work of an alien with a camera, who is always present at exactly the right moment, but never quite sure about the significance of what he is depicting. Tolagson’s picture has this kind of quality about it, too; it is by no means a naïve picture, but it puts naivety into play as a kind of style, in order to problematize viewers’ reception of its content. It is photography’s nature to depict things, and Abandoned Store carries out its work by framing the things that cohere around its subject’s absence. Painted symbols. Reflections. Light, and sky." 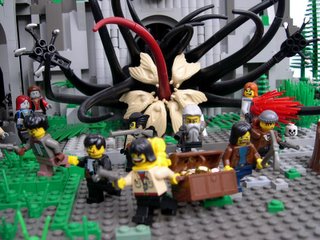 Nb. the figure at rear right. A real touch of genius, that. 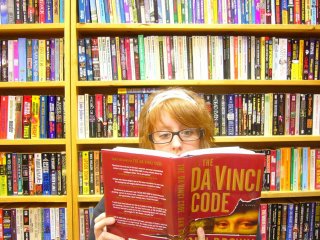 "I thought you could maybe get bus ads for Pulpfiction and they could look like this!", writes staff member Katie D.
- posted by cjb @ 2:02 PM