And to Stop You Interfering, I Shall Have to Dematerialize You Again -- world's best exhibition title, and the subject of a long review by yours truly, part of the new issue of Aaron Peck and Adam Harrison's Doppelganger magazine. Also recommended: Harrison's interview with photographer Evan Lee, which, among other revelations, generates this remarkable exchange:
"ADAM HARRISON: Photography, of course, can never escape representation, but it can, especially now, search for new ways to experiment with the possibilities of the picture, and Stella's claims remain relevant. Such experimentation must be done in the spirit of the great art of the past, while, like all of those artists, be constantly looking towards the future, not quoting so much as building onto an existing, and ever growing foundation.

EVAN LEE: True, but I find that today’s artists will often strategically quote the past or try to predict the future, forsaking the importance and difficulty involved in dealing directly with the present. That which is not yet validated involves a level of genuine risk, which I think helps to make for a good work of art. Unfortunately, when these noble efforts fail, it can sometimes result in what you are calling kitsch or garishness. This kind of work has value; it is at the very least always sincere because its present-mindedness. I think that occupying this category couldn’t be worse than those who merely ‘strategize’, ‘quote’ or ‘predict’. Kitsch or garishness could never result from this kind of work as the same self-consciousness I mentioned earlier would never allow it to surface. As such, it is insincere."
- posted by cjb @ 2:14 PM
Friday, November 04, 2005 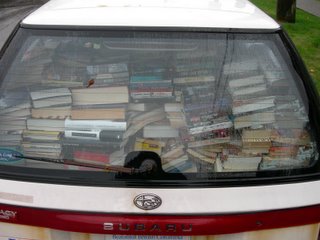 "You know, I didn't actually think you boys'd be coming."

Snakes & ladders with loaded boxes. The car sags, creaking, on its springs. John elects to stay behind while I drive the fully loaded and only partially-brakeable Subaru back to town, then back out again for the second load.

Sun under cloud, cutting low across the scubbed blue sky. Crows in Fraserview Cemetery, bundles of flowers on the new graves behind the chainlink fence by the road. Flat black plaques in place of tombstones, rising like RV pads from the muddy earth.
- posted by cjb @ 10:12 PM 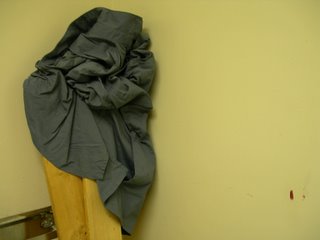 An Arrangement in a Bathroom, 2005 -- v.3, re-shot to eliminate a nagging problem in the lower left hand corner

I first read Frank Stella's Norton lectures, collected as Working Space, in university. Stella argues that the standard divisions between "abstract" and "representational" art are nonsense; through careful readings of works by painters like Rubens and Caravaggio, he demonstrates how representational art can actually depict space in extremely complex ways. At first I was wary of Stella's arguments, fearing them as apologias for his brightly painted relief sculptures. Then I saw Rubens' Entombment (c. 1612) at the Getty, and spontaneously converted to Stella's point of view.
- posted by cjb @ 12:44 AM 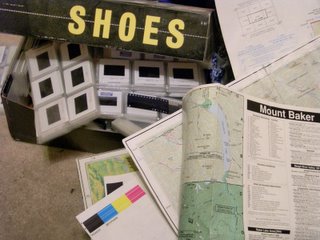 "Help me out here. This is one of those memory things, where you have to find three things that are different between the two photos, and I can only find two. I'd really appreciate it if you could help me out."

Someone else's customers from hell -- mine, too!

"Q: Do people donate all these books to you?

A: Yes. We show up for work every morning and there are boxes of valuable books sitting at the front door.

Q: Wow, really! I could open a book store? 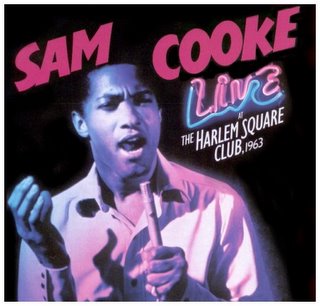 "The Sam Cooke who appears on this record, presenting his R& B hits of the last few years to a crowd that knows and loves his music, is not the same Sam Cooke who appeared on the Tonight Show, who presented himself as a kind of urbane 'swinger.' The Sam Cooke who sang to this club audience made up of working men and women is a harder, grittier version of the Sam Cooke that we have known from his records, a singer closer to the ecstatic gospel music with which he started out, the very entertainer that black audiences could see every night of the week in Charlotte, Roanoke, Raleigh, Baton Rouge, criss-crossing the South with one of Henry Wynn's SuperSonic Attractions package tours, battling it out with Jackie Wilson at clubs like the Harlem Square in nightly Battles of the Blues."
- posted by cjb @ 11:05 AM
Tuesday, November 01, 2005 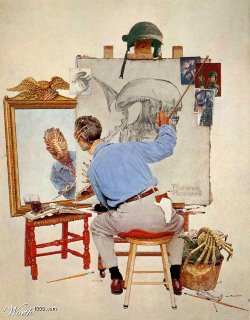 "'We had tremendous talent,' [publisher John] Kay said of the paper's staff."

Yes, until Kay either fired or alienated them all.

Former editor Bess Lovejoy's several-month reign at Terminal City was a breath of fresh air in media-saturated Vancouver; for that brief interval, everyone I knew was either reading or writing for the paper, and it looked like the Straight might have some genuinely literate competition.

So long, John! From my perspective, it looks like you pretty much got what you deserved.

(In criticizing Kay, I don't mean to impugn the paper's hard-working columnists and freelancers, talented writers like Ian King, Jada Stark, and Chris Eng, who I looked forward to reading every Thursday).

Pulpfiction regulars may be surprised or alarmed to see the bargain table immortalized on page B1 of today's Vancouver Sun.

Run, Michelina! Pen-and-ink illustration by Jamie Tolagson, proof positive that work on this apparently endless project hasn't completely stalled out yet. Worth clicking and enlarging; in particular, note Michelina's worried expression and the fish exploding from the Thing's sleeves and coattails.
- posted by cjb @ 4:00 PM
Monday, October 31, 2005

Someone writes to let me know that Londonbeat is still alive and thriving in Germany, of all places, and encloses a copy of the group's other early 90s Top 100 hit, Come Back. Thanks!

Though I did not remember until I heard its opening bars, this song, on the Air Canada inflight sound system, serenaded me on my return from Scotland to Canada in 1995, as the plane shuddered and bucked its way above Greenland and the Northwest Territories in the worst clear-air turbulence I've ever experienced on a commercial flight. People praying, luggage tumbling from the overhead bins, a stewardess noisily throwing up in the rear.
- posted by cjb @ 11:04 PM

"We are plunged into sudden darkness. Out of no-where, actors in devil costumes grab us by the shoulders and throw us into upright coffins. The doors slam shut and won't open. Someone is cowering next to me in my coffin, but it's too dark to see who it is. The heavy-metal soundtrack is cranked up to maximum volume, the devils start beating the coffins with sticks and laugh manically that we are on the way to eternal damnation.

Some of my fellow Hell Housers lose it completely.

"Previously, modern philosophical irrationalism was seen retrospectively by philosophers and historians as the source of the racist and totalitarian movements of the twentieth century. Now, philosophical reason itself is seen by postmodern philosophers as the general scourge of Western history. To reason's division of the real into the rational and the irrational is attributed the fatal Manichaeism and imperialism of the West.

This decision by the intellectuals that reason itself has mined modern life, and should be dethroned and banned in the name of its silenced others, is comparable to the decision to stop small children, girls and boys, from playing with guns, pugnacious video games, or any violent toys. This brutally sincere, enlightened probity, which thinks it will stop war and aggression, in effect aggravates their propensity. This decision evinces loss of trust in the way that play (fairy stories, terrifying films) teaches the difference between fantasy and actuality. The child who is able to explore that border will feel safe in experiencing violent, inner, emotional conflict, and will acquire compassion for other people. The child who is locked away from aggressive experiment and play will be left terrified and paralyzed by its emotions, unable to release or face them, for they may destroy the world and himself or herself. The censor aggravates the syndrome she seeks to alleviate, she seeks to rub out in others the border which has been effaced inside herself.

Philosophers who blame philosophy for the ills of civilization have themselves lost the ability to perceive the difference between thought and being, thought and action. It is they who expunge the difference between fantasy and actuality, between the megalomania projected on to reason and the irreverent forces which determine the outcome of actual conflicts. They have inflated the power of philosophical reason, conferring on it a supposititious dangerous potency. It is the philosophers, not reason, who thereby degrade the independence of political realities and contingencies. Terrified of their own inner insecurity at the border between rationality and conflict, between the new academic political protestantism and politics as the art of the possible, they proceed as if to terminate philosophy, to abolish or to supersede critical, self-conscious reason, would leave us resourceless to know the difference between fantasy and actuality, to discern the distortion between ideas and their realization. It would prevent the process of learning, the corrigibility of experience. This ill-will towards philosophy misunderstands the authority of reason, which is not the mirror of the dogma of superstition, but risk. Reason, the critical criterion, is for ever without ground."
- posted by cjb @ 11:11 PM 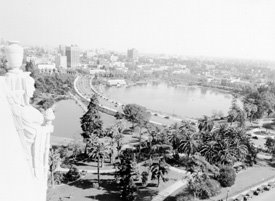 I will take my life into my hands and I will use it
I will win the worship in their eyes and I will lose it... 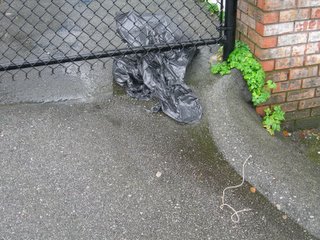 "As I was driven past the impressive gates and white-brick walls of the university and down to the ground, I was welcomed by some early-'90s pop music blaring out of the speakers. 'Ice Ice Baby,' by Vanilla Ice, was first up, followed by that old classic - and personal favourite - 'I've Been Thinking About You,' by cheesy crooners London Beat. Perhaps they knew I was coming.

If the tunes were a bit behind the times, then so was the ground - but in a refreshing way. My first impression was of a less-loved version of the Getty ground at Wormsley, with its nearby slopes and open spaces. But instead of green fields, here it was football pitches, and a collection of unfeasibly skinny cows and goats."
- posted by cjb @ 10:08 PM 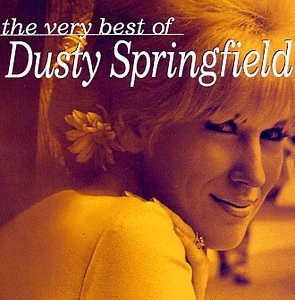 I can hardly wait to hold you
Feel my arms around you
How long I have waited
Waited just to love you
Now that I have found you
Don’t ever go
Don’t ever go
I love you so
- posted by cjb @ 9:51 PM

Dru forwards another 73 seconds of Saturn jamming with Sun Ra up in heaven
- posted by cjb @ 7:38 PM 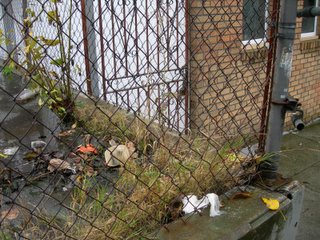