"When Mrs. T.W. Atkinson remarked in her 1863 Recollections of the Tartar Steppes and their Inhabitants, 'I am no amateur of these melons,' she used amateur in a sense unfamiliar to us. That sense, 'a lover, an admirer,' is, however, clearly descended from the senses of the word's ultimate Latin source, amātor, 'lover, devoted friend, devotee, enthusiastic pursuer of an objective,' and from its Latin-derived French source, amateur, with a similar range of meanings. First recorded in English in 1784 with the sense in which Mrs. Atkinson used it, amateur is found in 1786 with a meaning more familiar to us, 'a person who engages in an art, for example, as a pastime rather than as a profession,' a sense that had already developed in French."
- posted by cjb @ 9:33 AM 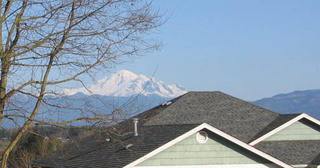 I'm making a large photocollage of found Internet images for a fundraiser exhibition of artworks by art critics next spring. The piece is a tongue-in-cheek mash-up of the work of my friends Stephen Shearer and Robert Linsley, and a way of paying homage to the great Japanese landscapist Ando Hiroshige.

I am currently seeking images of the Cascade volcano. The less "arty" the better; I have lots of topographical images and climbing-trip style pictures, mostly culled from mountaineer friends. What I'm looking for now are plain, even boring photographs with Mount Baker somewhere in the frame -- tourist views; real estate photographs; glimpses out airliner windows, amateur snapshots & etc. Please forward found JPEGs or GIFs to pulpbook@telus.net.

The piece will be produced in two states -- as a large, cut-and-pasted-paper collage, and an editioned digital print. Anyone whose submission is included in the final work will receive an AP of the editioned work, so please send your contact details along with any image(s) you forward. Thanks! 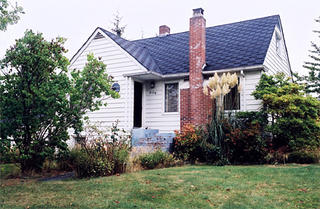 Dream: downtown, in a little park in the West End, I run into a woman I've not seen since university. "We live in East Vancouver now," she says, showing me a snapshot of the little bungalow she and her partner bought together.

The house in the picture is my Kitsilano grandmother's, which was demolished years ago.

"You're living in my grandma's house," I say.

Other people crowd around us to look at the picture, and we are pulled apart by the crush of their bodies.

On the B-Line express bus, a tall man with a conjurer's hat and tails turns toward me with a crisp white index card in his gloved hands. "She lives on Princess Street," he says.

On the card, in blue ink, in my friend's familiar hand, is the address 3959 Princess Street.

I wake to the bright red morning sky. Cold air through the balcony door and the seagulls crying, circling above the hospital.

(No Princess Street in Greater Vancouver, according to Google. Photograph of my grandmother's house courtesy Sylvia's project, 3176. Probably the first time in my life that my subconscious has provided a detail like an exact street address; typically, dreams are full of deliberately blurred writing).
- posted by cjb @ 8:49 AM
Tuesday, September 06, 2005 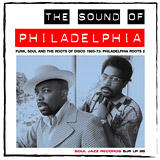 On the office deck: Soul Jazz Records' Sound of Philadelphia: Philadelphia Roots v.2, in awesome counterpoint to the Evan Lee essay currently occupying every waking second of my attention. Early favorite: the swelling strings and killer breaks of The Philadelphia Society's 100 South of Broadway.
- posted by cjb @ 4:23 PM
Monday, September 05, 2005 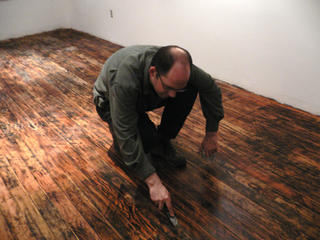 Putting the final touches on the CSA Space floor, 4 September 2005. Photograph by Adam Harrison. Sylvia's advice, as always, pertains: "Never shoot a bald man from above."
- posted by cjb @ 9:01 PM

"Hitchens argues that a benefit of the war is the 'training and hardening' of many thousands of American servicemen and women, which he says will be of use in 'future combat.' Large numbers of the servicemen and women in Iraq are in the National Guard or the Reserves, and very large numbers are not going to renew their service when they finally get out of Iraq, so their war experience is unlikely to do anyone much good later on. Many will suffer severe trauma, psychological problems and alcoholism as a result of horrific wartime experiences. Some number will end up on the street begging. Thousands of U.S. troops have been 'hardened' right into wheelchairs, with lost limbs, faces blown away, and little prospect of productive lives. We had a right to ask them to sacrifice themselves to defend our country against aggression. We did not have a right to ask them to give their bloody forearms, tattered eyeballs, shattered tibias, oozing brain mass, and crushed pelvises to achieve the petty foreign-policy aims that Hitchens lists in his article, even if the Iraq war had accomplished most of those aims, which it has not."
- posted by cjb @ 9:50 AM
Sunday, September 04, 2005

"We are a PREMIER seller of fine books, documents and ephemera, Specializing in the 18th through the 21st Century, AND we hold ourselves to the highest standards in integrity and customer service. We individually select each of our items in an effort to offer you the very best in Old and Rare, As well as the most popular and sought after NEW items!! Our mission is to offer you the finest quality books for your investment; books which will enhance your antique book collection and augment its value. In keeping with this mission, we are pleased to offer you this important and distinctive item which was hand selected for its significance and beauty. It will be a wonderful addition to your antique book collection; one that you and future generations will always treasure!"
- posted by cjb @ 10:49 AM