Waves of corpse-smell persist on into mid-afternoon.

Arm & Hammer Pet Deodorizer is sprinkled into the carpet, left to sit for twenty minutes, vaccuumed up.

The vaccuum bag splits up the side and sprays Pet Deodorizer, dust, human hair, & etc. all over the carpet.

"What the heck are you doing in there, anyway?"

Off to Hellsgate (Kingsgate Mall).

Stack of books ready to be added to the online listings.

...wave after unrelenting wave of putrification and rot!

Up the ladder to investigate the ceiling.

"Keith called," says Chris Clarke, poking his head in the door. "He and I think this smell of yours is psychosomatic."

Over to the fridge. Smell stronger now.

Wrestling the fridge out of the way.

No, this furry object has a tail.

Mr. Mouse is carefully interred in a transparent Slurpee cup and transported to the garbage can up the block by the bus stop. Of course the transparent coffin and its resident arouses the interest of everyone waiting for the bus.

"You're going to throw him out? Just like that? You're not even going to bury him?" (Little kid at the bus stop)

Meanwhile in Tahoe outside Casa Tony
Wetting rags in gasoline
A jealous Frankie Valli says
'Dawn, I want you back'
Lights a match and counts to 3"
- posted by cjb @ 9:57 PM

Sun hanging hot in the sky all day, beating relentlessly through my front room windows from 3pm to 5pm. Try pricing books with sweat rolling down your forehead and into your eyes! Blinking away salt, wiping sweat-splashes off the covers of mass market paperbacks by first time authors I've never heard of, the cool-looking surplus 50s-style wire cage fan Dadabase sold us last year whirling on the far side of the room, not so much cooling the store as moving superheated air around, and even that ghost of a breeze blocked by customers who invariably move the wooden stools dotting the shop directly in line of the fan, cooling their backs nicely and the baking, sweating clerk behind the desk not at all.

Many staff out on vacation; my next day off is August 8th, for which I predict torrential rain, hail, or freak flurries.

Off down the hill momentarily with Mr. McCarthy and my backpack. Secret destination in mind, located in the warehouse district just south of Skytrain, open until 11pm. 60+ flavors, the Cola Float and the bitter orange my favorites.
- posted by cjb @ 9:40 PM
Wednesday, July 20, 2005 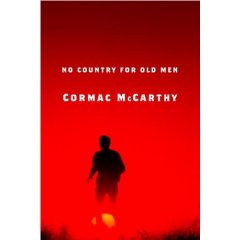 Anyone seeking my whereabouts is directed to the above, Mr. McCarthy's first new novel in seven years. 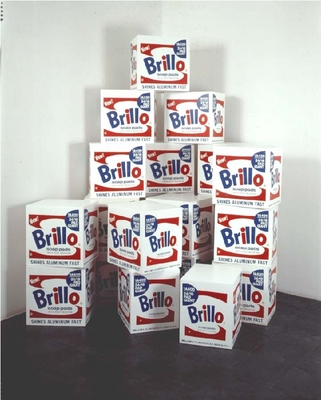 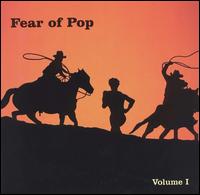 Ben Folds' first solo album, home of In Love, the sublime duet with William Shatner. This thing hasn't budged off the desktop since I first downloaded it six weeks ago; its pulsing strings strike a deep chord somewhere in the back of my reptilian hindbrain. Some of the lyrics are reproduced below, and bear no resemblance to any persons living or dead, & etc.

"So now you have me
completely figured out!
You feel sorry for me!
I can't 'express my feelings';
I can't tell the truth:

We are all alike

At puberty I was sworn to secrecy
by the international brotherhood
of lying fickle males.
I can't tell you anything
and I can't commit!

I will always treasure
our time together.
I don't feel enough of anything
to harbor the kind of disdain
That you maintain..."

Buying Votes in Iraq -- the New Yorker's Sy Hersh gets the goods:

"Richard Armitage, the Deputy Secretary of State under Colin Powell, put an end to Warrick’s efforts in the early fall. Armitage confirmed this, and told me that he believed that he was carrying out the President’s wishes. 'There was a question at a principals’ meeting about whether we should try and change the vote,' Armitage recalled, and the President said several times, 'We will not put our thumb on the scale.'

Nonetheless, in the same time period, former military and intelligence officials told me, the White House promulgated a highly classified Presidential 'finding' authorizing the C.I.A. to provide money and other support covertly to political candidates in certain countries who, in the Administration’s view, were seeking to spread democracy. 'The finding was general,' a recently retired high-level C.I.A. official told me. 'But there’s no doubt that Baghdad was a stop on the way.'"
- posted by cjb @ 9:30 AM
Sunday, July 17, 2005 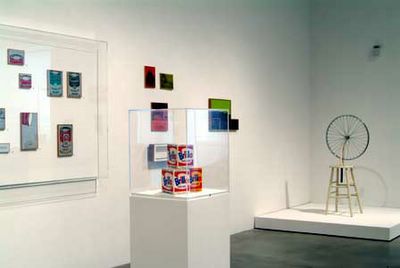 Installation view, Richard Pettibone retrospective, ICA, University of Pennsylvania. Pettibone makes miniatures and mash-ups of works he admires; thus the tiny Warhol Brillo Boxes (foreground), which I saw several years ago in an expensive (hence unpurchased) Pop catalog at the Whitney. I apparently absorbed more from this terrific little painted sculpture than I thought I did at the time. Roberta Smith, writing in the NYT, correctly nails Pettibone as an exemplary minor artist, invoking almost the exact same criteria Greenberg used years ago to describe the significance of Paul Klee's practice. I don't think this judgement is as harsh as it first sounds; it indicates technical skill, perserverence, and conceptual originality, if not "reach." And Warhol Brillo Boxes is an excellent work, playful and modest in turn. In the imaginary collection I carry around in my head, it sits in the same room as Johns' Painted Bronze and Nauman's Pay Attention -- pretty good company for a "minor artist"!

"Mr. Pettibone's work has always been vulnerable to some of contemporary art's most popular pejoratives: cute, twee, teensy and craftsy; minor; unoriginal. It is also called 'art about art,' which probably hasn't helped. It can't be said that these adjectives don't sometimes apply. But with large quantities of his work, something else prevails: formal rigor, the personalizing effects of scale and touch, faith in materials as carriers of artistic meaning and, above all, hard-nosed, even hypercritical reverence.

In addition, under cover of cuteness and pitch-perfect downsizing (note the infinitesimal nails on the plain wood strip frames), Mr. Pettibone has persistently asked some nagging questions. Who owns artistic ideas? And what have materials and craft got to do with them? What, really, is originality? Why does so much art have to be so big? And tangential to this: What is the essence of miniaturization? What happens to visual experience when previously large, famous paintings are reduced to the size of the viewer's face, while, at their best, looking mind-bogglingly like the real thing? An answer that touches on several of these questions is: A new, transformative, maybe original sense of intimacy and ownership that is unusually empowering. It is rather amazing to see art cut down to size with its integrity intact. In most cases cuteness gives way to an unsparing yet radiant sense of craft."