Aerial Photographs of Mount Slesse under winter conditions, by Washington state photographer/pilot John Scurlock. These terrific images impress both the mountaineer and the photo critic in me. Check out that Upper NE Buttress!

"Weather seemed perfect the morning of the 19th, so I left a detailed flight plan with Karen and departed. Once aloft it was evident that strong wind out of the NE would be a factor.

I flew to Mt Larrabee and circled just south of the border at 8500'. I then contacted Vancouver Center (air traffic control), requested and got a clearance into Canadian airspace, to remain in contact with them for about 15 min., then proceeded NE while descending, crossing the SE ridge to begin circling N/NE of Slesse at about 7500', clockwise. (I would normally circle CCW but decided to go CW to stay to Slesse's N, out of turbulence downwind of the pk).

Once in position, I verified that I was at an altitude that would provide safe clearance over the N ridge, since I would cross it each time I circled. I set power to provide an airspeed of 100 to 110 MPH, since the route is in the shade and I knew the shutter speed might be a little slow. Faster speed can mean blurry shots in these situations.

With everything set up and stabilized, I began photographic passes. The camera was set in 'burst' mode, shooting off ten or so images in about five or six seconds. I was also using telephoto mode to provide some distance away from the N/NE face. A left bank is required to get the wing out of the picture. This results in a turn towards the mountain, another reason to stand away at a safe distance. Using this technique I made about eight or nine circuits. This is the same method I have used many times in the past to get shots of certain geological features or other climbing routes."
- posted by cjb @ 11:08 PM

You're Cleared For Takeoff

The dragon unfurled its wings. Huge, flickering, impossible to look at.

The whistle of an incoming cannon ball.

The dragon's wings accelerated, blurring out of focus, shrieking like an airliner ready for take-off.

Rope paying out over the side.

Michelina was abruptly jerked off her feet and out of the boat. A brief freezing shock. Salt water filled her nose and mouth. A huge explosion nearby made her whole body shake, and then she surfaced again, dragged along the surface of the sea like a waterskiier behind the still accelerating dragon, and then abruptly into the air, the ocean below her now, the shattered remains of the boat scattered across the waves.

Ten feet up, then twenty, thirty, forty! She caught a brief glimpse of Lady Genevra, the knights, and their horses dangling from ropes of their own. Another cannonball whistled by. Sixty feet now. Panicked birds erupted from the cliffs in squawking black clouds.

She grabbed the rope and began to squirm up it, keeping the slack tight between her thighs, as if climbing in gym class. A hundred feet now, the island's black sea-cliffs still rising beside them, the sharp angle showing no sign of relenting. The sea and the Duke's fleet spread out far below, like tabletop models.

One of the dragon's huge scaly feet loomed above her. She grabbed for it and scrambled up behind the furiously beating wings, holding onto the rope and the cracks in its scales until she reached its relatively level back. The noise from the wings was almost unbearable, like the amplified whine of a jet engine, but it diminished as she made her way forward, trying not to look down, until she was finally level with one of its ears."
- posted by cjb @ 10:40 PM
Friday, April 22, 2005 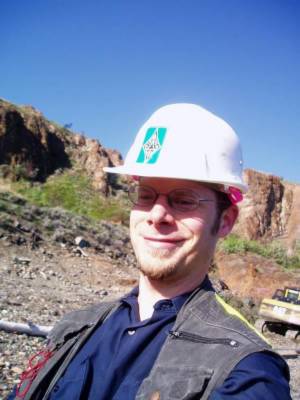 My brother, Drew Brayshaw (a.k.a. dru), on location somewhere east of the Coast Range. Dru sent me a JPEG of a dead, partially rotted-out cow this evening, likely taken not so far from here, with a request to post it. Thanks anyway. But I am more than pleased to post this image, which looks more like its subject than just about any other likeness I've ever seen.

"There is a certain critical attention mountain dwellers must pay to the phenomena of their location. . . ."

CB: Working on my kids' book.

CG: Really! What's it about?

"Looking at the dragon was like staring at the sun. Gaze into its eyes, or at its face, or any part of it, and you saw that it was composed of smaller pieces, and those of smaller pieces, too, the whole thing sizzling with movement, like TV snow, so you had to glance away or close your eyes, perhaps fearing that if you did not, the sight would permanently stamp itself on the back of your skull."

A little taste of things to come from Michelina. The dragon's friendly, and, though I didn't know it until this morning, when it first gazed down at the friends in their boat and addressed them, sounds like Bleak House's Mr. Tangle.
- posted by cjb @ 11:49 AM

Hipster in the coffee line-up, verbatim: "I have taken to writing on walls, windows and advertisements themselves, because communication has been monopolized."
- posted by cjb @ 11:46 AM

Though I typically don't enjoy either appearing or speaking in public, you can find me at two different events this week. I'll be giving a brief introduction to Steven Shearer's work tonight at the Vancouver Art Gallery as part of the annual VIVA awards hooplah, and, on Saturday afternoon, I'll be having a "public conversation" with Kim Kennedy Austin at the State Gallery stop on Canadian Art's Vancouver gallery hop.
- posted by cjb @ 9:35 AM 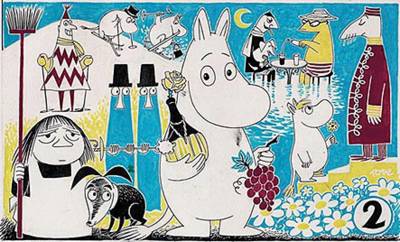 Moominland Midwinter and Comet in Moominland home with me this evening. Working on Michelina again, trying hard for that truly Janssonesque blend of comedy and menace.

Welcoming the cool rain in of the astounding dawn
Watch the birds hovering over Narrow Moor
In deeper lines of deeper sleep, into the tumuli
All the pretty machinery under the sky
For you have drunk all your beer go drown your empty selves
For then you will have lost it all the last of this island

As you blackout
Blackout again
My love. . .

So bring it down, let it fall, into a drizzling bliss
Then we'll hyperventilate in the old forest
Then I will see all those things, things that can not be seen
For you have drunk all your beer, go drown your empty selves
For then you will have lost it all, the last of this island 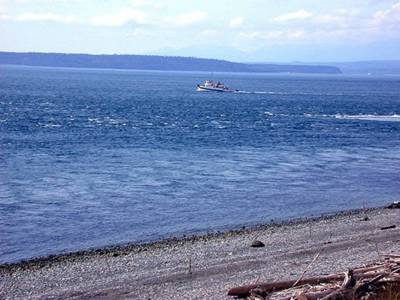 David Burns, popularizer of the "cognitive mood therapy" program for persistant depression that my doctor enrolled me in last month suggests writing potential activities, and the pleasure you think you'll derive from them, down in advance, then checking your projected percentages against how you actually feel about the activity, post-completion.

Eg., missing Port Townsend ferry, walking park beach with Gavin for an hour and a half: 18% projected versus 93% actual.

Rising Up And Rising Down

William Vollmann shuffled into the dimly-lit reading room off the basement coffee bar at Elliott Bay Books around quarter after seven. A small, soft man, with strange, roughly chopped hair and eyes that point in slightly different directions. He read two chapters from his new novel, Europe Central, then took questions.

Hearing him describe An Afghanistan Picture Show as his most memorable failure did not exactly fill me, who had only brought that title, long a favorite, to the signing, with anything resembling confidence, but I wandered up afterward anyway, for a signature, drawing, and conversation.

I don't think Vollmann is a particularly great fiction writer, but I have read almost all of his nonfiction, some pieces repeatedly -- the Survival Research Labs chapter of the Rainbow Stories; much of The Atlas -- and having had a chance to talk to him I think I now understand why that writing means so much to me. Whereas the fiction is baroque and expressionistic, the nonfiction is, comparatively speaking, very plain, with Vollmann's subjects doing most of the talking, and his authorial interjections focusing on, in turn, the speaking subject, or things in the subject's immediate environment that support or reinforce what the subject is saying.

In other words, a reportorial technique that amounts to the minimization of self, and the integrity, when self does appear, to subject it to the same relentless scrutiny that he, in turn, subjects others to.

Vollmann asked me, and every other person in the signing line-up, detailed, probing questions about our signing choices. His uneven eyes watching carefully as I (& others) spoke. I have no doubt that if he were to recall, days or weeks after the fact, the signing, he would remember not only whole chunks of dialogue, but other, more telling details, too.
- posted by cjb @ 8:53 PM
Sunday, April 17, 2005

Busiest day since the week before Christmas. 15 people still browsing at 7:30pm!

I took five minutes to browse while sweeping pink confetti-petals from the blooming trees outside back out the door. And felt, for once, briefly proud. Better stock on the shelves right now than ever before.

Out the door momentarily into the warm spring night for a movie date with SGB and her all-too-briefly-in-town sister, Vollmann's Afghanistan Picture Show and the Buffett Partnership letters in my bag.

Off tomorrow to hear William Vollmann read at the Elliott Bay Book Company in Seattle. Back late. Instant replay on Tuesday.
- posted by cjb @ 8:34 PM

Overheard at the till:

CUSTOMER WITH SHINY ASTRONAUT-STYLE JACKET: Yes, it's true, it's the closest I'll ever get to outer space.

MR. JOHN TWEED (thoughtfully): I should invite you inside my brain for a few minutes.
- posted by cjb @ 8:30 PM