Yet Another Art Review (from the relaunched Terminal City)

Insight arrived right at the end of my circuit through Steve Shearer’s exhibition at the , past the silkscreens, digital prints, oil paintings and crayon drawings, past the Xeroxed flyers in their transparent plastic boxes, the appropriated text works and the mysteriously lit garden shed. Insight was an ink drawing hidden beside the shed, a scaled-up version of a note that, judging by the shaky handwriting, has been recreated from something slipped anonymously under the studio door or jotted in a gallery comment book. “Sorry Steve,” it says, “when we talk about cultural diversity we don’t mean yours,” and then trickles off into a blacked-out scrawl, some other, potentially more damning insight committed to paper, self-censored, and destroyed.

The note’s pissy self-righteousness makes perfect sense, given the presently moribund state of institutionally administered culture. There will always be a place in this sleepy world for the optimistic affirmations of culture, self and place that pass for Canadian avant-gardism. No one asks if these baggy, largely installation-based works give pleasure, or provoke much in the way of critical thought. Their creators position themselves as survivors – of racism, sexism, art school, or Western civilization – and their works’ presence in the gallery system tautologically affirms the creators’ self-worth and profound narcissism.

Steve Shearer’s work doesn’t affirm anything. Its “attitude” – if such a thing can be discerned from its formal hetereogeny, thirty-three objects in half a dozen different media, some consisting of five or more smaller pieces, which are themselves autonomous artworks –offers nothing that could plausibly be described as a social program or an aesthetic manifesto.

Shearer’s detractors – for a long while, I counted myself among them – tend to assign to him a pose of irony, for lack of a better way to assimilate the stylistic variety that defines his production. That young dude posing down with his prize pot plant, his eyes glittering vampire-red from the camera’s flash? Irony. The painting of the greasy lunk whose hair highlights spell out H-A-S-H? Irony. Shearer’s fake basement metal band, the Puff Rock Shiteaters? Irony, baby. The alternative – that these works might actually be as transparent as glass, that Shearer might find something worthwhile or even appealing in his subjects – is too worrying for most institutional viewers to contemplate. Thus the unsigned wall panel at the CAG, whose anonymous author spends several densely worded paragraphs discussing systems of representation, and Shearer’s hopscotching jumps among them, without ever once discussing the artist’s subjects, a list apparently designed to bait the dependably liberal conscience of the Canadian art bureaucracy: longhairs; burnouts; suburban rednecks; decayed child stars; Kiss tribute bands; drunks, and assorted other “high”-culturally challenged folks.

Shearer’s work, while it draws upon pop culture, is not itself pop culture, nor the by now very common Duchampian move of displacing non-art into an art context. Instead it is a kind of avant-gardism – modernism, if you like; despite institutional culture’s repeated attempts to debase the term I know of none better – which uses images appropriated from fan cultures and other non-art contexts to critique institutionalized modernism from within.

Shearer sees creativity as inherent in all human beings. Sprinkled through his works are images of children swarming over odd, 1960s-style playground sets, or working on craft projects -- doing macramé, making patterns out of rocks or shells, or cutting shapes from felt. These projects derive from the Bauhaus’ insistence on the integration of art and everyday life. Art and craft are, in this view, regulatory mechanisms channeling libidinal energies that would otherwise be spent fucking, fighting, or smoking up in the basement.

Well and good, so long as the art and craft projects are valued as evidence of creativity, and not as neatness or conformity contests. Once they are, it becomes painfully obvious that some works can’t measure up. They are technically deficient, “failures.” The colored serigraphs on the CAG’s west wall are blow-ups of some of these duds, which lack even basic compositional qualities like balance and symmetry. You sense that their creators will shortly be hustled out of the elementary school art education program, ousted in favor of those kids who color inside the lines, who draw photorealistic cars, dinosaurs, and ponies; will progress to equally realistic images of Wolverine or Tupac Shakur; and may one day, fed the right university curriculum and enough critical theory, produce “installation art” of their own and embark on teaching careers.

Shearer’s concern – like Manet before him, and Velasquez, and Caravaggio – is with history’s losers, with those that history’s winnowing-processes exclude, and how you occupy yourself once history passes you by. Blurry snapshots of your ancestors, or sculptures made from “environmentally sensitive” materials like bark, feathers, or shells? Hello Canada Council B-grant! Xeroxed copy of a handwritten guitar instruction flyer? Sorry, Steve….

Underlying Shearer’s whole exhibition is a current of simmering rage that tempers and shapes his extreme technical facility. Cumulatively, his works exist as an injunction to, as Bruce Nauman once put it, PAY ATTENTION, MOTHER FUCKERS! Some times, as in the large photolaminates shown several years ago at the Or Gallery, which are also included in the current exhibition, this anger, or desire to bait the audience, to toss an off-register or unappealing image up at them, boils over, and the result is a enlarged photocollage of a tinseled Christmas tree, or a grinning drunk, or a sweaty teenage guitarist which feels more posed than honestly felt, the art world equivalent of dialing the volume knob up for effect.

At other times, such as the remarkable silverpoints and red crayon drawings of longhairs, rage and technique perfectly coincide, producing images of creepy subjects (young men, mostly, bloody, or glossy-eyed, or fixing you with their best fuck-off stare) that register more discretely. This objectivity – the suspension of how an artist feels about a subject, in order to represent it with greater fidelity – is one of modernism’s oldest injunctions, and, viewing Shearer’s work, I find myself reaching again for names like Manet and Velasquez and Caravaggio. His angry, aggressively ambitious works walk in their company.
- posted by cjb @ 1:02 PM
Sunday, December 12, 2004 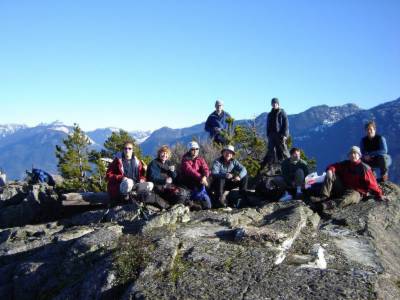 ClubTread party on the summit. Author second from right, dru fourth from right at rear, Rose T. Cat out of sight, warming up in the top pocket of my backpack for her big performance. Photo credit: toomanycanyons (trip organizer), clubtread.com 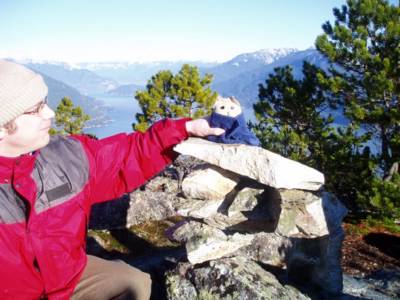 Leading Peak summit, Anvil Island, Howe Sound, B.C. The seldom-glimpsed author and the somewhat more frequently photographed Rose T. Cat, swaddled up against the cold like a Russian countessa. Predictions of whitecaps, outflow winds & etc. turned out to be a little premature; outside of the ice on the summit rocks and the $25/group fee to cross the bible camp's waterfront property on the way to the trailhead, everything was about as good as it could have been. Photo by dru.