Open Letter to Devil Dogs of the 3.1

"I see an old man in a red kaffiyeh lying against the back wall. Another is face down next to him, his hand on the old man's lap -- as if he were trying to take cover. I squat beside them, inches away and begin to videotape them. Then I notice that the blood coming from the old man's nose is bubbling. A sign he is still breathing. So is the man next to him.

While I continue to tape, a Marine walks up to the other two bodies about fifteen feet away, but also lying against the same back wall.

Then I hear him say this about one of the men:

Through my viewfinder I can see him raise the muzzle of his rifle in the direction of the wounded Iraqi. There are no sudden movements, no reaching or lunging.

However, the Marine could legitimately believe the man poses some kind of danger. Maybe he's going to cover him while another Marine searches for weapons.

Instead, he pulls the trigger. There is a small splatter against the back wall and the man's leg slumps down.

'Well he's dead now,' says another Marine in the background. "

Fog all around the West End this morning, a giant grey horseshoe or bowl muffling the twang of the trolley wires and the trucks gearing up at the lights on Burrard.

The cherry tree on my morning walk that blooms twice yearly in early winter and late spring. Its tiny pink petals.

The cherry trees we made in grade school. A puddle of black ink on white paper. You breathe out through a straw, driving the ink up and out in rivulets to make the trunks and wet, smeared limbs. Dry the paper over the radiator. Tear pink tissue paper into tiny squares. Fold the edges up around an HB pencil's eraser to make "blossoms." A dab of Elmer's Glue. Attach and repeat.

The alders' dark trunks in the early dusk.

The musky smell of wet coats and boots in the cloakroom. 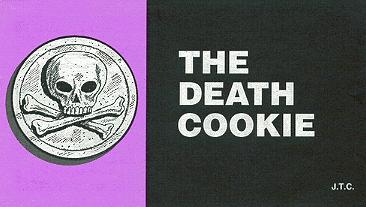 A box of 50-odd Chick tracts, purchased from a Christian bookstore in Indio, California in 1993 or 1994 is still up on an apartment shelf somewhere. Felt vaguely guilty about the purchase at the time; I had gone in hunting HPL and PKD, not JTC, but the collection included many banned in Canada and was just too good a deal to pass up. The shopkeeper naturally assumed she was speaking to a kindred Christian soul and made appropriately pious conversation while I tiptoed toward the door with the booty under my arm. 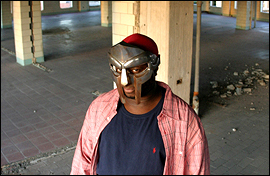 MF Doom, aka Victor Vaughn. Madlib and Doom's Madvillainy on high repeat in the shop right now, smoky 70s soulful samples underneath MFD's slurry mumbly delivery. "Listening to music while stoned is a whole new experience. Grass will change your musical habits...for the better." An MC with a mouth full of marbles!

Not much in evidence the last few days -- 2 new art reviews on deck, one lengthy, plus that Vija Celmins skyscape of a few days ago, still knocking around in my head.

Off on Skytrain with today's second cup of decaf and Gene Wolfe's The Knight. Approaching hard work by avoiding it, pretty much as usual.