• The portrait of the Queen really does resemble a shapeshifting alien lizard. Stare long enough at those heavily lidded eyes and you half-expect a forked tongue to flicker out from between her lips

• "Could we ever know each other in the slightest without the arts?" Not quite the worst sentence in Canadian literature, but pretty close. Courtesy perennial New Canadian Library remainder table favorite Gabrielle Roy

Announcement on BC Ferries' 7pm Nanaimo to Vancouver sailing, 26 Sep 04:

"Would the people smoking pot on the upper deck please step away from the air intake. Thank you." 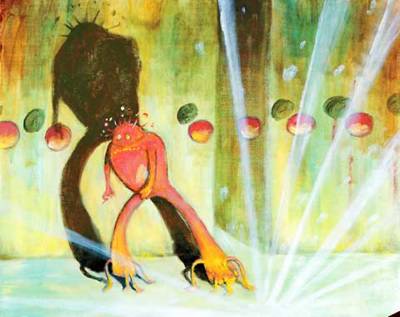 "So, I exclaimed "Look outside - I know that you'll recognize it's summertime!!" - not to be some cosmic hippie solution - there is no answer - just a change... but better to express sorrow and experience sadness than to let inner emotions inflate to the point of despair - despair only leads to more death. For it's bad enough that something wonderful in your life has left you - but to fall into despair - despair does not allow you to even enjoy what is still living..."

This album, and these paintings in particular, make seasonally depressed me very, very happy. Thanks, Wayne!

"Using pre-release software is an inherently 'adventurous' activity. You should be a skilled and confident computer user, be capable of answering most of your own questions by extrapolating from the documentation or just by figuring it out yourself, and not be likely to get upset if something goes wrong. Otherwise---you are still a good person and deserve to use the software when it is ready." 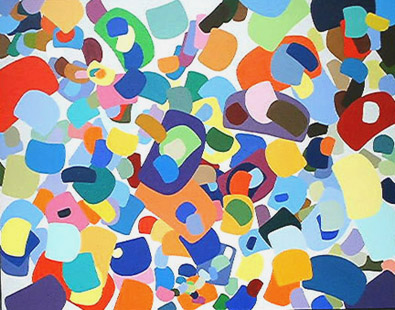 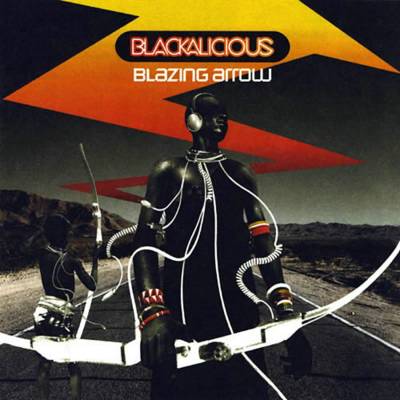 Chief Xcel and Gift of Gab, rockin' the house

[Gil Scott-Heron:]
(Cause all we got is rhythm and timin'
We go beyond the edge of the sky)

[Gift of Gab]
FREE! Like a bird out in the wind in the night
Like a 747 to LA that's in flight
FREE! Like a garden flourishing in the wind
Like a student bout to do it when he's graduatin
FREE! From any of the energy perception
Can never be defined create the definition within
FREE! Just lovin life itself and never pretend to be
Anything other than the man I was meant to be
Travel through time and get a glimpse of the centuries
To come a better day is promised remember
FREE! Like my nephew in a few months about to be out the penitentiary
Meditation [repeated 9X]

[Gift of Gab]
UH! I never hesitate about a reluctant mind
Just put the peddle to the metal see what ya find
You back there slouchin over won't you pick up your spine?
Let's make it really really happen live up this time
Cause you can choose to say "Good morning God" or "Good God, morning"
With black clouds storming
I walk without umbrellas into these woods
Don't need em cause the mighty trees will shelter me good
I'm eating berries from the bushes of the heavenly good
From the ?stakes/steaks? the power came to us whenever we stood
Reverberatin out we're reachin each and every hood
Whenver we could the spiritual anatomy fool
But never take the credit for it B cause that'd be rude
It's just the way in life we searchin for that had to be new
You gotta work it though cause everyday ain't Saturday fool
Evolve into a better life and be happy with you and me

[Gift of Gab]
RISE! Like the sun up at the crack of the dawn
Like a wakin child in the morning stretchin and yawnin
RISE! Like an infant being held in the light
Like the smoke from an incense when it's ignited
RISE! If you're sleepin won't you open your eyes again
The greatest high be that natural high within
No need to force the progression just ride the wind
You'll know the answer to the where and why and when
If you keep workin for your search you will find the end
Though at the end you find it only begins again
See at the end you'll see it only begins again
And everything you learn you're only rememberin
Cause you're

[Gift of Gab: repeat 2X]
It's me
Let your mind and your soul be free
Work to shine meet your goal believe
Spread that kind of L-O-V-E
Take some time off the lonely

[Gil Scott-Heron: repeat to end]
Cause all we got is rhythm and timin'
We go beyond the edge of the sky

"The finding comes after two years of research, using $7.50 worth of circuit parts from a Radio Shack store and dozens of spiny lobsters from La Jolla Cove purchased from a local fisherman."

"Many of the people who came to us were of the kind who would be a nuisance anywhere but have special opportunities in a bookshop. For example, the dear old lady who ‘wants a book for an invalid’ (a very common demand, that), and the other dear old lady who read such a nice book in 1897 and wonders whether you can find her a copy. Unfortunately she doesn’t remember the title or the author’s name or what the book was about, but she does remember that it had a red cover. But apart from these there are two well-known types of pest by whom every second-hand bookshop is haunted. One is the decayed person smelling of old breadcrusts who comes every day, sometimes several times a day, and tries to sell you worthless books. The other is the person who orders large quantities of books for which he has not the smallest intention of paying. In our shop we sold nothing on credit, but we would put books aside, or order them if necessary, for people who arranged to fetch them away later. Scarcely half the people who ordered books from us ever came back. It used to puzzle me at first. What made them do it? They would come in and demand some rare and expensive book, would make us promise over and over again to keep it for them, and then would vanish never to return. But many of them, of course, were unmistakable paranoiacs. They used to talk in a grandiose manner about themselves and tell the most ingenious stories to explain how they had happened to come out of doors without any money—stories which, in many cases, I am sure they themselves believed. In a town like London there are always plenty of not quite certifiable lunatics walking the streets, and they tend to gravitate towards bookshops, because a bookshop is one of the few places where you can hang about for a long time without spending any money. In the end one gets to know these people almost at a glance. For all their big talk there is something moth-eaten and aimless about them. Very often, when we were dealing with an obvious paranoiac, we would put aside the books he asked for and then put them back on the shelves the moment he had gone. None of them, I noticed, ever attempted to take books away without paying for them; merely to order them was enough—it gave them, I suppose, the illusion that they were spending real money." 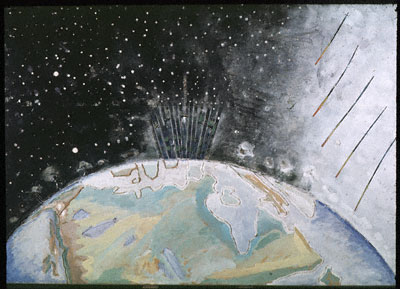 "PAUL: I'm not sure I get it, though. I mean, how did you ever come up with the idea to do this...this project?

AUGGIE: I don't know, it just came to me. It's my corner, after all. It's just one little part of the world, but things happen there, too, just like everywhere else. It's a record of my little spot.

PAUL: It's kind of overwhelming.

AUGGIE: You'll never get it if you don't slow down, my friend.

PAUL: What do you mean?

AUGGIE: I mean, you're going too fast. You're hardly even looking at the pictures.

PAUL: But they're all the same. 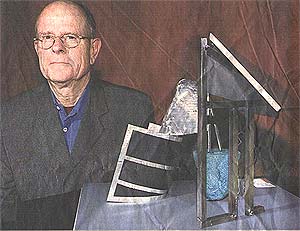 Sculptor Mowry Baden, longtime UVIC prof, with maquette. Baden's works can be loosely categorized as sculptural, architectural, or environmental "machines" built to decenter viewers' bodily subjectivity (a mouthful, I know). Baden's real contemporaries are people like Bruce Nauman, Michael Asher and Gordon Matta-Clark, though his art has never achieved the same degree of public profile as theirs, probably due to his relative seclusion in Victoria.

All this thanks to some kind soul unloading a long-OP Art Gallery of Greater Victoria catalog, Mowry Baden: Maquettes and Other Preparatory Works, 1967-1980. 48 pages of densely theoretical text by Baden and lots of photographs of site-specific objects, many now destroyed. An early Christmas gift!

I only ever met Baden once. Grant Arnold and I had been at the AGGV on VAG business and were killing time before the evening ferry. Up ahead, a bald, quick-moving man in an incredibly loud untucked Hawaiian shirt was loading building materials into an old rebuilt dairy truck that looked like it had been mated with an armored car. "Hey, that's Mowry," said Grant. "Come on, I'll introduce you."

While Mowry and Grant conducted a twenty minute high volume discussion in the middle of the street, I observed that the pattern on Baden's shirt consisted of small armored dinosaurs marching briskly to and fro. "Nice triceratops," I volunteered, once the principals ran out of breath.

Baden drew himself up. "That's not triceratops," he proudly informed me, "that's protoceratops." 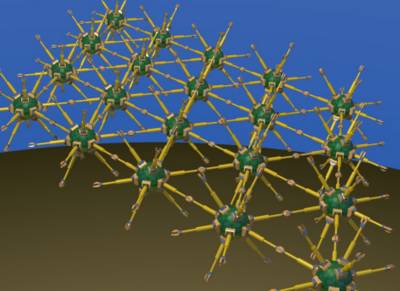 Fall fog this morning, scarcely above ground level at Main and Broadway, my breath smoking in the cool moist air. 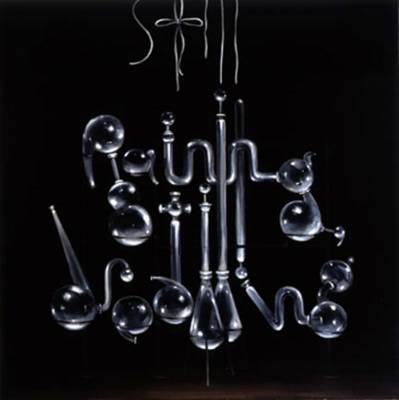 Neil Wedman, Still Raining, Still Dreaming, 2004. From the series Electric Ladyland, up at the Belkin Satellite on Hamilton