Consummate noir author Paul Cain -- author of Fast One (Black Lizard, many reprints) and a biography rivalling any of his fiction.

"He extended his mythology to reseumes and professional film publications, where he claimed to have written such books as Syncopaean, and Hypersensualism: A Practical Philosophy for Acrobats. He also claimed to have been published by the Black Sun Press, and in famous periodicals such as Blast and transition."
- posted by cjb @ 9:56 AM

Back in university, when I had my car, it seems, at least in my memory, that I went hiking, climbing, or off-trail scrambling for most of every summer. Then I graduated, got the entry-level dead-end clerical job that my English Lit degree pretty much demanded. The car, after 5 years of trips to the Rockies and Joshua Tree and every logging road from West Vancouver to Pemberton, died, and languished in the garage at my parents' house, until my dad took it upon himself to sell it.

Sans car, I learned a few things. I learned that the bus is an annoying and inefficient way to get to climbs. Without a car, great whacks of southwest BC are totally off-limits, unless you happen to have three or four days to spend, dharma-style, hitching to the logging road, camping at the side of the road, hiking the logging road the second day, camping at the trailhead late on day #2, watching it cloud over as you set up camp, hiking out, disillusioned, in the rain, on day #3. . .

Most importantly, I learned that most people *with* cars seemed to be much better, not to mention faster, climbers than me. I went on a few group trips, only to watch my new-found friends power off into the distance, leaving my sad puffing silhouette in the dust.

I didn't hike or climb at all for the better part of five years. I learned I have a natural tendency to melancholy, and that this disposition is exaggerated when I can't get out in the mountains. In 2002, I hit upon a method I employ to this day. I look for seldom-climbed peaks close to Vancouver, things that aren't already written up a million times online. Because I travel alone, I usually pick targets that are technically NTD, or peaks that can be scrambled with an 8mm rope and slings.

Last winter, I bought a set of old CAJs and studied up on some neglected and interesting-sounding peaks. I read tons of articles by John Clarke and Doug Kasian, which psyched me up again for solo travel in the mountains. Then I read bivouac.com articles like Mark Rebman's terrific account of climbing Mount Martyn, in Golden Ears Park, a summit I had never even heard of before, let alone ever contemplated climbing. All this study got me ready to go for the 2004 solo scrambling season.

Target #1 was Mount Liddell, the highest summit on Gambier Island. I've seen this peak every year since childhood, circling Gambier in the family boat, but, until a few weeks ago, I wasn't able to name it or to locate it accurately on a map. And, in true DIY style, one can get from my West End apartment to the summit using only a combination of bus, feet, and ferry.

At one point, Mount Liddell was featured in a revised edition of "103 Hikes." Then, apparently, it was dropped from subsequent editions. A mystery!

• it was possible to do the entire climb in a long day, and not miss the last ferry off-island

• the bush was really, really bad

OK, I was psyched up now. I was going to go climb this thing!

I set my alarm for 6am, but woke up at 4am when some loogan pushed over a newspaper box in front of my apartment, waking me, and everyone else in a 6-block radius. Down to the Blue Bus, where I killed an hour reading the New York Times and watching the rising sun slowly stretch along Georgia Street. Then off on the Blue Bus to the Langdale ferry, and, once in Langdale, onto the Wavedancer 3, a passenger water taxi-cum-ferry.

I was a little surprised when the Wavedancer went first to *Keats* Island, but hung in there, studying the Tetrahedrons and the Howe Sound summits from the unfamiliar angle, and eventually the ferry crossed back to Gambier and dropped me at New Brighton Harbour. I didn't bring a watch, but the ferry pilot told me it was 930am, and that the last boat back to Langdale was at 630pm. Move fast!, was his suggestion.

All the Net directions for Mount Liddell are wrong. To get to the summit in 3 or 4 hours, do the following: from the public dock, walk 300 ft up the road to the general store. A dirt road forks left. Follow it as it climbs NW, then NE. After a half hour or so, another road, posted, LAKE, cuts sharp left. Follow it down, generally NNE, for three or four klicks, through recent logging and second growth. The road crosses Mannion Creek (possible campsite with picnic table and running water). At a signposted turn for Mount Killiam, keep straight ahead. At approx. the 4km mark an old skid road, posted, "LAKES" cuts back sharp right into the Mannion Creek valley. It climbs in long switchbacks, some quite steep, then splits in two at a signed junction. Left for Mount Liddell, right for the Gambier Lakes. The left fork now climbs very steeply, soon arriving at a small plateau and Third Lake, a Lost Lake-style muddy puddle full of lily pads and water striders. After Third Lake, the road becomes totally overgrown with second growth pine trees, and washed out to boot. Flounder up through head-high bush, occasionally catching sight of square white plastic markers nailed to trees and red ribbons hanging from branches. Don't try to follow the markers exactly, they simply indicate the general direction of the "best path" to follow, which is usually about 40 or 50 feet away. Use the hillside contours to visualize the path of the old road, then flounder along it, dodging crotch-grabbing trees and unseen rocks and roots as you go.

Pause to wonder what the sign, "BRIDGE CLOSED," refers to. Inch ahead to survey a very old, very manky-looking logging road bridge, now totally rotted through, with big air under it, and, somewhere way, way down in the big dark gully it spans, devil's club. Scamper across, whistling Curtis Mayfield. Move on up!

The old "road" circles around Mount Liddell's northern flanks, which, contrary to the bivouac.com summary, are just as steep as anything found on Mt. Killiam. The roadbed (bush carpet?) eventually climbs to a broad col between Mt. Liddell and an unnamed bump to the NE. From here, a sign marked, "PEAK," points right, up a stream gully. Follow this -- much loose boulder-hopping, but, thank God, no bush -- for approx. 500 feet of elevation gain. The gully now intersects another overgrown road, running due W and perfectly flat. It is, if such a thing is possible, even more overgrown than the road down below. Swim through waves of baby pine and cedar. Scramble over logjams full of hornets. At one point, scrambling under a log, poke a big cigar-shaped "fungus." Wonder why it buzzes. Run away fast!

From the end of the road, white plastic markers lead SW onto Mount Liddell's summit, about 20 minutes up. Hop over fallen logs and scramble up short but irritating rock steps, reminiscent of the old Deeks Lake trail. Finally stagger up onto the (mostly) forested summit, which features great views of the Tetrahedrons, the Rainy River valley, and, surprisingly, the southern Tantalus Range. Bask in the sun. Take pictures. Disturb hornet's nest and retreat. . . .

The worst part of reversing your steps is the heavily overgrown road below the summit. Once off it, the trip goes fairly quickly. Flail downhill through the trees, always trying to stay dead center of the old roadbed. Collect bush scars on your hands, face, and legs. Disturb more hornets. Run downhill through the bush as fast as you can on your aching knees. Collect stings on your neck, arms, and the backs of your legs. Learn that pissed-off hornets move way, way faster than you do. Soak your stings in Third Lake. Contemplate missing the ferry. Flail downhill, & etc...

To save your aging knees, attempt to flag down rides on the New Brighton road. Hop in the ditch as Gambier property owners aim, grim-faced, straight at you with their decrepit 4x4s and ATVs. Disturb the cousins of the hornets up the hill. Surprise the drivers who stiffed you for a lift by actually keeping up with them as you run.

Off to Mount Liddell, Gambier Island. 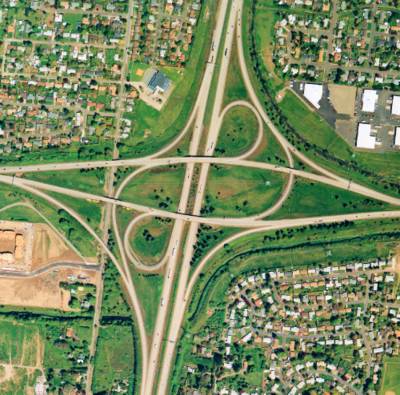 Every I-5 Interchange in Oregon State (thanks Oregon DOT!)

I-5, Vancouver/Seattle w/ Dan Bejar and Mr. Otis Clay for company. Thai food at my favorite cheapie takeout stall under the monorail, and, later, nighthawk browsing at Magus Books. Found two (of four) volumes of Orwell's collected essays, letters and journalism, and an Oxford illustrated Dickens. Big lineup for Farenheit 9-11 in the U district. Clouds drifting in off the Pacific, farm smells in the dark near Mount Vernon and, inexplicably, fireworks all the way home, rising up from ball fields and deserted overpasses, glittering green-gold showers sputtering over the trees.

"Seven hours?" asked the customs guy. "Was it worth it?"