"Bill Drummond, by his own admission, suffers from the Pop Disease. It's a fairly common contemporary condition, although it's probably fair to say that few suffer as acutely as Drummond, or indeed any number of my own dear friends. Personally, I think this is why he has decided to slice up his Richard Long piece into 20,000 sections. I think it's to do with the ideas of ownership in a Popist world, wherein there is a strange contradiction set up whenever Pop sells, or maybe I mean whenever someone cursed by the Pop disease buys. Specifically, I'm thinking about the Pop single. I'm thinking about how when you buy a Pop single you are buying into the multiple by default, except, and here's the interesting bit (well, it's interesting if you're a bit sad and maybe bitten by that disease): the relationship you have with the multiple is singularly personal. Your copy of the multiple becomes invested with meaning. The meaning lies in emotions, memories, flashes of perfume and shivers of light. It lies in the way the sound of an organ dips and rises, the way a voice cracks and creaks. They way the vinyl crackles on the old Marconiphone record player."
- posted by cjb @ 10:35 PM 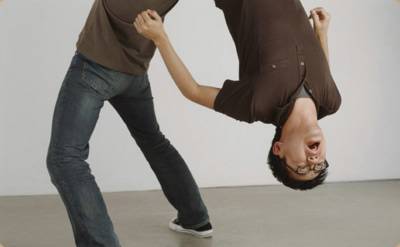 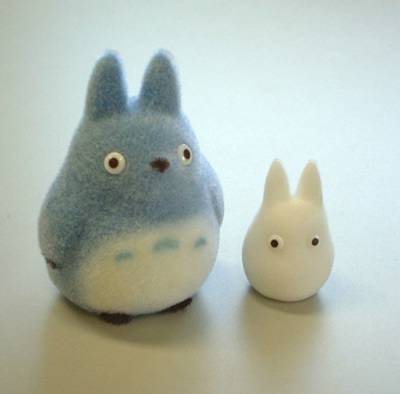 Bar Yourself from an Antiquarian Bookstore! (5 Easy Steps)

1. Spend 10 or 15 minutes making a big pile of one-of-a-kind items, the sort of high end material the dealer sees once or twice a year.

2. Try to wrangle a discount on the pile, including an item clearly marked, "Sorry, no discounts, no trades," priced at close to the dealer's original cost.

3. Go apeshit when politely rebuffed. Scream and holler. Storm outside.

4. Wait 30 seconds or so. Storm back inside. Continue yelling and screaming. Tell the dealer (who doesn't recognize you, let alone know your name) that you're "one of his best customers," and that you're "never comin' back." Pause for full weight of this threat to sink in. Scream at a few of the dealer's employees, for good measure. 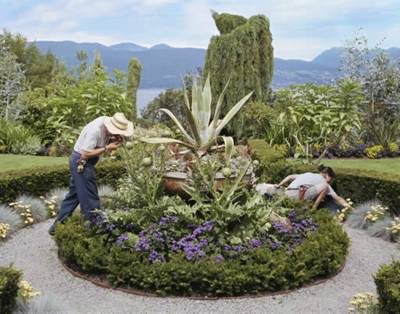 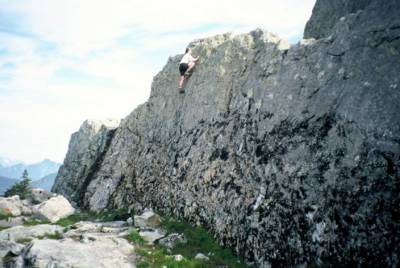 Snowhooping, from 100 Views of Mount Baker 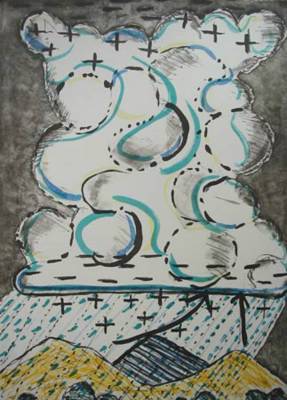 Paterson Ewen, Thundercloud as a Generator

Found the AGO Ewen retrospective catalog in a last box of Doris Shadbolt's things yesterday afternoon.

Michael Ondaatje, from the catalog introduction:

"These great metaphors of the heavens, made with simple utensils from hardware stores, feel like cargo cult objects put together by a man who has walked back into the darkened cave after staring at the sun." 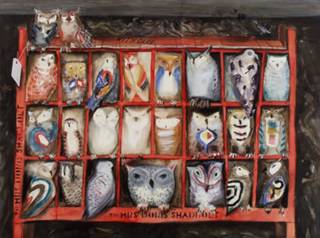 Jack Shadbolt, Owls for Doris, a Christmas gift. Note the resemblance of the crate contents to the Incredible Talking Cats

Re-revised and re-edited "author's preferred version" of the Kelly Wood review for the Straight. Some changes mine, some the Straight's. I've retained those that are useful and ignored others. The Straight's editing process is actually pretty good -- an editor calls and works through the changes line-by-line, inviting the writer's participation in the process, as opposed to, say, my experiences at the Vancouver Courier, where a now-fired "editor" would truncate paragraphs more or less at random, recombine them a la Burroughs, then call to lecture me on how the resulting stew didn't make any sense.

Photographer and critic Kelly Wood's new installation at the Western Front is easy enough to describe. Wood has plastered the gallery's walls with shopping fliers, transforming the colourful come-ons for safety razors, antiperspirant, and mixed nuts into wallpaper. She's also suspended from the ceiling black plastic garbage bags stuffed with paper. Whether either intervention constitutes successful art depends on two things: how knowledgeable you are about art history and Wood's place in it, and how much intellectual leeway you're prepared to grant her thinking.

For those viewers with little or no familiarity with art history, Wood's exhibition will be a slap in the face. Its gestural poverty and total lack of anything resembling traditional artistic technique seem like cold, sneering provocation, a refusal to make unique or beautiful things. "This is all you're getting," Wood seems to say, "take it or leave it."

Other, more historically savvy viewers will recognize a variety of sources. The black garbage bags reference the silver, helium-filled Mylar clouds Andy Warhol created for a Leo Castelli Gallery exhibition in 1966, and Wood's own photographs of garbage. The flier wallpaper refers to Warhol's wallpaper-patterned pictures of flowers, Coke bottles, cows, and Chairman Mao, and, perhaps, Vancouver photoconceptualist Ian Wallace's late-'60s Magazine Piece, which simply consisted of an issue of Seventeen magazine torn up and taped to the gallery wall.

Some might suggest Wood's Modern Decor for the Poor is a tongue-in-cheek or feminist subversion of conceptual and Pop strategies. I disagree, precisely because these subversions are now so easy to accomplish that they are almost beneath an artist of Wood's ambition. Fans of contemporary art register art-historical citations with the same sensitivity that other, better-adjusted people recall sports stats. Local artists like Ron Terada or, internationally, Martin Creed and Michael Asher seem to be in competition to create an almost invisible art, an art of ideas, not things. This gamesmanship is by now an established genre in its own right, a history of artistic gestures demonstrating that the apparently empty gallery is not really empty, even if all your senses suggest it is.

Wood doesn't play this game. Against neoconceptualism's dematerialization of art into thinking or writing about absent things, she asserts the messy primacy of objects: trash bags, colour photographs, and biographical details, hidden in the things she throws away.

Wood's thinking is, in this respect, conservative, but historically defensible and grounded. This conservatism makes her a strong critic. Her recent writings on artists like Terada, Jeff Wall, and Mike Kelley are strikingly original. Her own work, astringent and off-putting as it often seems to me, emphasizes the amount of intellectual work that she employs to create her art. This is not a popular stance these days (it's far easier to manipulate codes, to sample from art history as if from a buffet) but it is a necessary one, and Wood, of all her local contemporaries, seems most willing to shoulder this burden.

Bill Reid and Beyond: Expanding on Modern Native Art

New Douglas & McIntyre title, which I ordered for its transcript of a speech Doris Shadbolt gave in 1999 on Bill Reid. Having just spent the last three weeks surrounded by Doris' books I wanted to hear her own voice one last time, before dispersing her things to others.

The transcript in the book is a suburb example of Doris' intellectual concision and poise, but not, having now read exactly half of the book on the bus and in 5-minute breaks in Surrey, the best thing in it. That honor has to go to 'Namgis Doug Cranmer's description of working with Reid at UBC in the late 1950s:

"Before we started carving the poles, Bill came up with this idea that you've got to forget everything that you ever learned about carving from other people, because we're going to do it his new way. Herman Collinson was there too; Reid had brought him down from the Charlottes as a helper. We sat and listened to what Bill had to say. Bill took a whole length of brown paper. He had blocked it off and drawn what was going to be on this pole -- exactly, as to what he thought. We said okay. We had this log all rounded off and we stuck the brown-paper drawing on there. He said, "Okay, every time you cut out the line, you take the template and stick it back on, and then draw it back in. Never lose the line." I said, "I don't think it's going to work, Bill." After a couple of whacks at it, you know what the hell's going to happen with this thing: the more you hack away at the wood, the smaller it's going to get. All of a sudden the paper isn't going to fit any more. That's when I found out that Bill had tantrums."
- posted by cjb @ 8:49 AM

The Light is Always Green

We’re only flying past so we dig our sevice fast
From the waiters to the women to the wine
Never mind the match, I’ve an urgent date to catch
Get me to the concert hall on time

Back from another two days in Surrey, mostly spent skirting the Surrey-White Rock Border, and the little winding roads that run from Highway 99 to Crescent Beach, whose tiny houses and small green yards haven't changed appreciably since I was last there in the mid-1970s. Gorgeous late light through the cedar forests skirting the shoreline, a deep greenish-gold that triggered off all kinds of associational memories.
- posted by cjb @ 8:40 AM
Monday, June 14, 2004

Posted by some wit:

I am eBay.
Before the universe was, I am.
I made the suns. I made the worlds.
I created the lives and the places they inhabit;
I move them here, I put them there.
They go as I say, they do as I tell them,
I am the word and my name is never spoken,
The name which no one knows. I am called eBay,
but that is not my name.
I am.
I shall always be.
- posted by cjb @ 8:34 PM

Wax Poetics, found the new issue in Portland's Reading Frenzy. Looks like hours of reading ahead, a thick, squarebound format plugged with text, reminiscent of the old Comics Journal specials, 100-odd pages+
- posted by cjb @ 9:39 AM